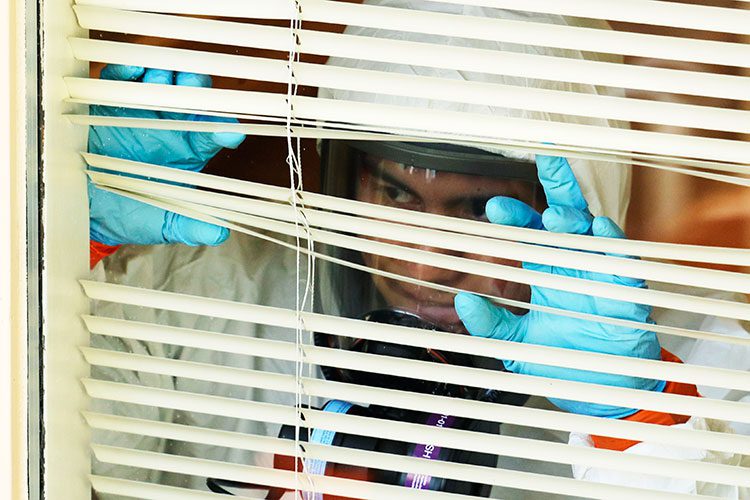 A worker from a Servpro disaster recovery team wearing a protective suit and respirator peers out a window as he waits to exit the Life Care Center in Kirkland, Wash. for a break cleaning the facility. The nursing home is the center of the coronavirus outbreak in Washington state. (AP photo by Ted S. Warren)

When Berkeley News first spoke to medical doctor and infectious disease specialist John Swartzberg in early February, the United States was home to only a handful of cases of the new coronavirus infection COVID-19, and many were optimistic that travel restrictions and quarantines on affected individuals could quickly contain the virus.

A little more than a month later, the number of confirmed COVID-19 cases in the United States now tops 3,400, and with testing still limited in many regions, the actual number of people carrying the virus could be much higher. Efforts to prevent transmission of the highly contagious disease have upended lives across the nation, with schools shutting down, bars and restaurants closing, large events cancelled and many required to work from home or losing their jobs altogether. And, at midnight on Tuesday, March 17, residents of six Bay Area counties were ordered to shelter in place, limiting any non-essential travel outside the home.

In a new interview, Swartzberg underscores the fact that — in part due to poor leadership by the executive branch of our government, the Centers for Disease Control (CDC) and the Food and Drug Administration (FDA), which failed to deliver adequate testing on time — we still don’t have enough data on the virus to really know how widespread the disease will ultimately become, or how long these drastic social distancing measures will last. But, he says, preventing transmission through hygiene and limited social contact remain crucial to avoid overloading our hospital system. 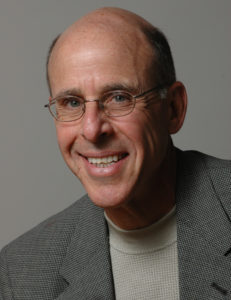 John Swartzberg is clinical professor emeritus of infectious diseases and vaccinology in the the UC Berkeley-UCSF Joint Medical Program.

Berkeley News: What is currently known about the disease progression of the virus? What symptoms should people watch out for?

John Swartzberg: Because this disease looks very similar to influenza, even very seasoned clinicians can’t make the distinction by the individual’s medical history and physical examination. With this disease, and also with influenza, people are going to usually get body aches, significant fever and a cough. The thing that people should look out for, regardless of the cause, is if they’re starting to feel short of breath. That’s a call to immediately get some medical attention.

If you’ve got symptoms consistent with either influenza, or COVID-19, or another respiratory pathogen, that’s a reason to call your doctor’s office and ask his or her advice about what you should do. They may want to do a rapid influenza test, because there’s a drug to treat influenza. If the influenza test is negative, that may prompt the test for COVID-19.

How do we make sense of the reports about the mortality rate of COVID-19, which seem to range from 1% to 3.4% and even as high as 6% in Lombardy, Italy?

Better testing will give us a better handle on it, but for now, it’s a moving target. All of that said, here in the United States, the Johns Hopkins site, for example, suggests that the case fatality rate is about 3.4%

Angela Merkel said that up to 70% of Germans will eventually contract COVID-19. In a panel last Tuesday, UCSF doctors said the same thing: We can expect 50% to 70% of Americans to get COVID-19 this year and up to 1.6 million to die from it. Are these worst-case scenarios or the likely scenario?

These are all modeling studies based on what we know about the virus and its behavior in the human population. The models are only as good as the data that they get, and we’ve been talking about how limited the data are. So, the modeling is helpful in trying to understand what’s going on, but I think we have to look at it with some degree of skepticism. So, I would not panic about the data, but I certainly would not, from a planning standpoint, ignore them either.

Why has been so hard to get the number of tests that we need? Is it particularly hard test to develop?

The technology to do this testing has been around for 35 years. It’s very easy to do, and all laboratories can do it. It’s done many times a day here on our campus. So, it’s not the technology that was the limiting feature. The blame goes squarely on the CDC and the FDA, and certainly to the executive branch of our government.

I’ve not been privy to any of the discussions at the CDC and the FDA. That said, just like the public has been getting very mixed messages from the current administration, the FDA and the CDC have also received mixed messages that have created a great deal of confusion, in terms of how to conduct things.

Very quickly, the Chinese researchers identified the entire viral genome and made it available worldwide. The Germans developed a test based upon the data from China, they gave it to the WHO, the WHO disseminated it to all the countries and the United States said, “No, we’re going to develop our own.” Why? I have no idea. I think it’s an element of bureaucracy, and it’s an element of hubris.

The CDC finally sent out to the state health departments a small number of tests in early February, and the majority of those had a defective primer, which means that they didn’t work. So, they immediately withdrew or recalled all of those tests. It took three and half weeks for the CDC to send new and corrected tests. Why it took three and a half weeks for a technology that’s 35 years old, I don’t know. But these are some of the answers: politics, bureaucracy, hubris, arrogance, incompetence.

I see a lot of people stressing the importance of “flattening the curve,” or slowing disease transmission, through social distancing and hygiene measures. Could you explain a little about what this means and why it is important?

The way health care is delivered today is dramatically different than 40 years ago or even 20 years ago. Today, hospitals are run very efficiently. And what efficiency translates to, in part, is that they don’t have a lot of stores of equipment. They don’t have a lot of extra beds, because an extra bed is not efficient. And so, we have a significantly fewer number of American hospitals, in general, and a significantly fewer number of hospital beds and fewer number of ICU beds than we had 20 years ago. So, if a pandemic occurs, it’s not built to handle that. It has very little play.

We have to try to limit the utilization of our health resources so they will be there for everybody who gets sick. How do you do that? Instead of having a big spike in cases and then a drop, we try and, as you were saying, flatten the curve. We try to decrease the transmission of the virus, so, even if the same number of people ultimately end up getting infected, as opposed to that occurring all in a six or eight week period of time, it occurs in a 3-to-6-month, or even a 12-month period of time. If we’re able to flatten that curve, it will mean that we should have enough hospital beds and we should have enough ventilators for people. But if we don’t flatten that curve, we’re going to be in the same place that Italy is right now, making choices of who goes on a ventilator and who dies.

Many policymakers and public health experts are urging social distancing through working remotely, canceling large events, and now, in the Bay Area, issuing a shelter-in-place order that limits all non-essential travel outside the home. Do you know how long these social distancing measures are likely to last?

That’s a crystal ball question. Nobody knows the answer. We have a virus that humans have never encountered before. That means that we have nearly 100% of the human population susceptible to this virus. So, there are plenty of people that the virus can continue to infect. We don’t know if the immunity we get to the virus after we recover from the infection gives us permanent immunity or not. If it does, then the virus, ultimately, because it spreads so fast, will burn out, because it will not have enough hosts. This is called herd immunity. But on the other hand, if our immunity is not permanent, if it wanes in a few months, then infections could keep smoldering for years. We don’t have the answer to that question.

Based on your experience and scientific understanding, what do you think the next few months are going to look like? What should we expect, as individuals and as a larger society?

I think we’ve already had a taste of that. Three weeks ago, I would have never dreamed we wouldn’t see March Madness or have the NBA cancel its games. I wouldn’t have believed we’d see all these school closings. So, we’ve had to change our perception of our world very radically in a short time span. We’ve all had to hunker down. We’re doing remote education and remote workplace. I think we’re going to continue to see our lives remain significantly changed. When I look into my crystal ball, my guess is we’re in it for months and maybe longer. I hope I’m wrong.

This article originally appeared on the Berkeley News Website.