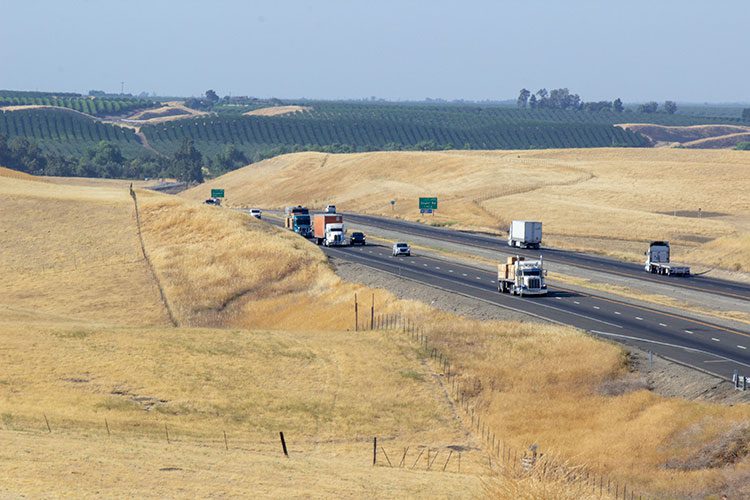 Extending California’s stringent diesel emissions standards to the rest of the U.S. could dramatically improve the nation’s air quality and health, particularly in lower income communities of color, finds a new analysis published today in the journal Science.

Since 1990, California has used its authority under the federal Clean Air Act to enact more aggressive rules on emissions from diesel vehicles and engines compared to the rest of the U.S. These policies, crafted by the California Air Resources Board (CARB), have helped the state reduce diesel emissions by 78% between 1990 and 2014, while diesel emissions in the rest of the U.S. dropped by just 51% during the same time period, the new analysis found.

The study estimates that by 2014, improved air quality cut the annual number of diesel-related cardiopulmonary deaths in the state in half, compared to the number of deaths that would have occurred if California had followed the same trajectory as the rest of the U.S. Adopting similar rules nationwide could produce the same kinds of benefits, particularly for communities that have suffered the worst impacts of air pollution.

“Everybody benefits from cleaner air, but we see time and again that it’s predominantly lower income communities of color that are living and working in close proximity to sources of air pollution, like freight yards, highways and ports. When you target these sources, it’s the highly exposed communities that stand to benefit most,” said study lead author Megan Schwarzman, a physician and environmental health scientist at the University of California, Berkeley’s School of Public Health. “It’s about time, because these communities have suffered a disproportionate burden of harm.”

The study also points out that exposure to fine particulate matter (PM2.5 ) has been linked to poor outcomes from COVID-19, adding urgency to the need to reduce air pollution, par­ticularly for communities of color that are disproportionately affected by both.

Diesel exhaust consists of both particles and gases and contributes significantly to PM2.5 air pollution worldwide. PM2.5 exposure from any source can compromise children’s lung development and can trigger airway inflammation and exacerbate asthma and cardiopulmonary diseases. Diesel exhaust has also been designated a human carcinogen by California’s Office of Environmental Health Hazard Assessment (OEHHA). 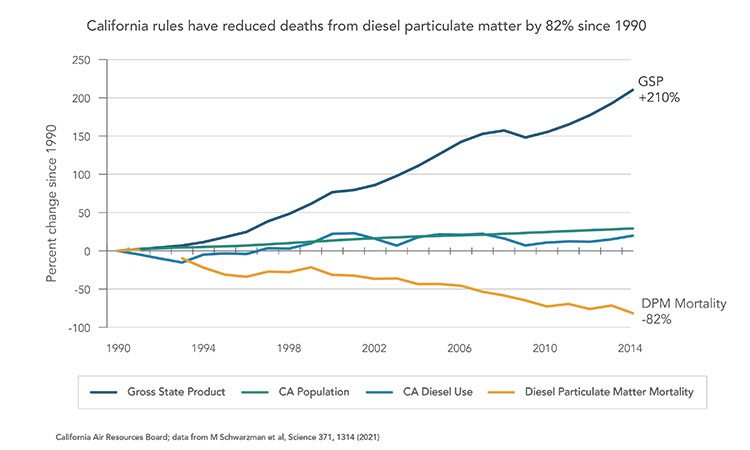 By 2014, improved air quality cut California’s annual diesel-related cardiopulmonary deaths by half, compared to the number of deaths California would have seen if the state had followed the same trajectory as the rest of the U.S.Photo: Megan Schwarzman

“There are hundreds of studies around the world that link particulate matter exposure and premature death,” said study co-author Álvaro Alvarado, a former air pollution specialist at CARB who now works for OEHHA. “In cities with higher levels of air pollution, there are also higher hospitalization rates for respiratory and cardiovascular illnesses and more emergency room visits for asthma.”

To improve air quality, CARB’s policies have gone beyond federal standards to limit diesel emissions from a variety of mobile sources, including heavy-duty trucks and buses, ships and port equipment, train locomotives, and the engines that power construction equipment and agricultural machinery.

In their study, Schwarzman and colleagues cataloged the wide range of CARB policies that target each emissions sector and tracked how changes in diesel emissions corresponded to the implementation of those rules. They then show the impact of CARB policies by comparing California’s reductions in diesel emissions to those in the rest of the U.S. Their analysis reveals that CARB’s policies reduced emissions to the extent that, by 2014, California was emitting less than half the diesel particulate matter, as would be expected had the state followed the same trajectory as the rest of the U.S.

“The average lifetime of a diesel engine is about 20 years, or a million miles, so waiting for fleet turnover is just too slow,” Schwarzman said. “California requires retrofits for existing trucks so that all diesel engines are held to a higher standard. This has made an enormous difference for air quality.”

Requiring upgrades for the engines that power heavy-duty trucks and buses has reduced California’s diesel emissions in that sector by 85% since 1990, the study found. By comparison, the study estimates that if California’s heavy-duty vehicle sector had followed the trajectory of other U.S. states, the sector’s emissions would have dropped by only 58% in that period. 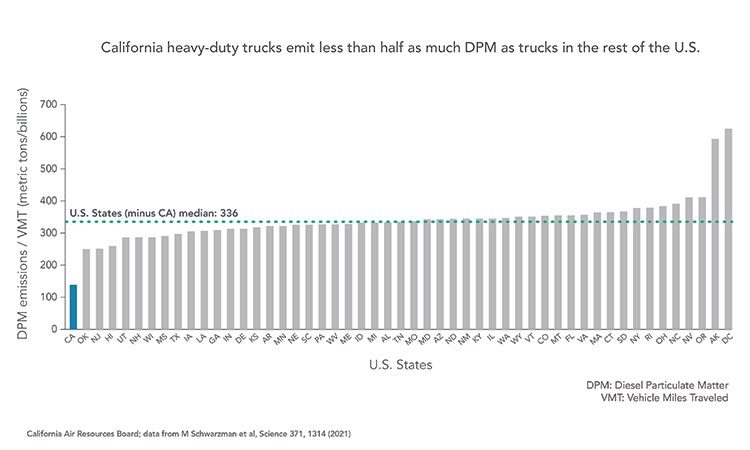 Requiring upgrades for the engines that power heavy-duty trucks and buses has driven down California’s diesel emissions in that sector by 85% since 1990, and the state’s trucks now emit the least PM2.5 pollution per vehicle-miles-traveled of any state.Photo: Megan Schwarzman

Because the highways, ports and rail yards where diesel engines operate are more likely to be located near lower income communities of color than affluent, white communities, regulating diesel emissions can help correct persistent disparities in air quality and health, said senior study author John Balmes, a Berkeley Public Health professor and professor of medicine at the University of California, San Francisco.

“There are truly different levels of exposure to air pollution, and those differences in exposure have been linked to differential health outcomes,” said Balmes, who also serves as the physician member of CARB.

The study reports that every dollar the state has spent controlling air pollution has generated $38 in benefits attributable to lower rates of illness, premature death and lost productivity attributable to air pollution. As a result, there is no reason why the U.S. as a whole shouldn’t adopt diesel emissions standards similar to California’s, the authors argue.

“In terms of public health, federal air quality policy should be moving toward that of California, because we’ve shown that it works, and we’ve also shown that greening transportation can be good for economic growth,” Balmes said. “These environmental regulations not only save lives and improve public health, they actually drive innovation and grow the green economy, which is the future.”

Co-authors of the study include Samantha Schildroth of UC Berkeley and May Bhetraratana of CARB. This research was supported in part by the California Breast Cancer Research Program under grant 23QB-1881.