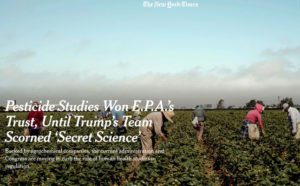 Research by Professors Eskenazi, Bradman, Holland and others highlighted in the New York Times.

“The project, run by scientists from the University of California, Berkeley, and funded in part by the Environmental Protection Agency, is still going all these years later. Known as Chamacos, Spanish for “children,” it has linked pesticides sprayed on fruit and vegetable crops with respiratory complications, developmental disorders and lower I.Q.s among children of farm workers. State and federal regulators have cited its findings to help justify proposed restrictions on everything from insecticides to flame-retardant chemicals.”

Backed by agrochemical companies, the current administration and Congress are moving to curb the role of human health studies in regulation.