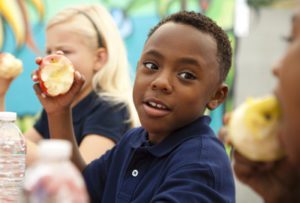 Students and parents overwhelmingly approve of last year’s sweeping changes to school meals, according to a study released today by UC Berkeley’s Atkins Center for Weight and Health.

The report, which examined how 10 California school districts have adjusted to the new rules, found that parents and students agree that school meals are improving. Nearly 90 percent of students say they like at least some school meal options, and some evidence suggests that students’ overall eating habits may be improving as a result of the school meal overhaul.

The new nutrition rules are part of a comprehensive reform of the U.S. School Meal Program, which was required by the Healthy Hunger-Free Kids Act of 2010. The U.S. Department of Agriculture developed the nutrition standards as part of that overhaul, which took effect in the 2012-2013 school year. Studies show that well-nourished students are more able to focus in class and perform better in school.

“When the new school meal standards took effect one year ago, many skeptics predicted that students would reject the healthier options. This simply isn’t happening—at least not in the 10 districts we studied. Many students like the new meals, and school districts have made commendable efforts to make the menu more enticing and the cafeteria environment more inviting. Our research shows great progress, but there’s still room for improvement,” said researcher Michelle Ross MPH’09, who co-wrote the report with the Atkins Center’s Director, Pat Crawford.

The study, which was funded by The California Endowment as part of the foundation’s Health Happens in Schools campaign, found that each of the 10 districts studied had made a dedicated effort to improve the quality and appeal of school meals over the past year. The most popular initiatives undertaken by the schools were cooking more from scratch, enlisting youth leaders as “taste-testers” to evaluate potential menu items, and creating fruit and vegetable promotions, such as “fruit of the month” programs, to introduce students to new produce options.

Despite the overall positive results, the study also identified several areas for improvement. Researchers found that several school districts were hampered in their efforts to prepare meals from scratch as a result of outdated or limited kitchen spaces and equipment. Time for lunch was also an obstacle identified. Most elementary schools studied allowed only 20 minutes for each lunch period, which may not be sufficient time to get food from the cafeteria line to table areas, and still have time to eat a full meal.