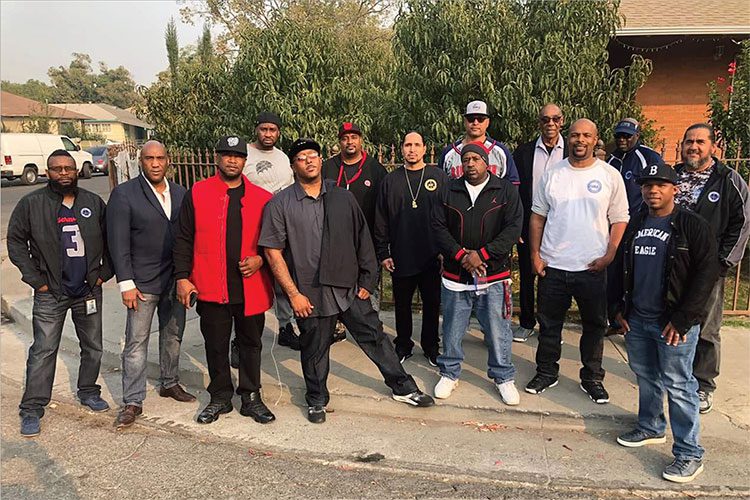 New research from the University of California, Berkeley has the potential to shift the public debate around police reform, and to reimagine public safety models that rely on policing to reduce gun violence in America’s urban cities.

Published by UC Berkeley’s Center for Global Healthy Cities, the report found that the gun violence reduction program, Advance Peace, has helped to decrease firearm homicides and assaults in several California cities — most recently by almost a quarter in Stockton — saving taxpayers millions of dollars in city expenses. 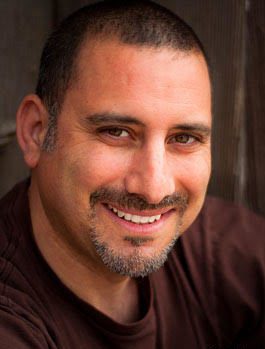 The Berkeley paper comes at a time when many city, state and national leaders are examining the structural racism of America’s criminal justice system, grappling with a surge in big-city gun violence and questioning how much money is spent on police forces.

“These are the hardest to reach people,” said Corburn. “The most likely to be ‘trigger-pullers.’ They’ve almost all been shot, incarcerated and/or traumatized by police. The expectation is they’re going back to jail. To turn them around and to give them an alternative to violence is pretty crucial.”

And the program has consistently shown results.

According to the study, after two years of implementation in Stockton — from October 2018 through September 2020 — Advance Peace recruited 34 fellows, interrupted 44 gun-violence conflicts and mediated over 500 community conflicts that prevented escalation into gun violence. 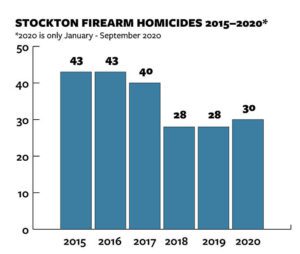 Data from Corburn’s paper shows that shooting deaths were low during the years Advance Peace operated in Stockton.Photo: Hulda Nelson

A March 2020 study, also by Corburn, found that Advance Peace had similar results in Sacramento, reducing gun homicides and assaults by 22%, and by 39% in Del Paso Heights, an area in Sacramento known for prevalent gun violence.

While the program saved lives in both cities, it saved money as well.

Corburn said that if each of the potential shootings Advance Peace workers stopped in Stockton resulted in an injury, the estimated city costs saved was $42.3 million. If those same conflicts instead led to homicides, tallied costs would have been $110 million.

“This program plays a role that police can’t, and never will,” said Corburn. “They have credible messengers that are able to disrupt the gun violence, and change the community dynamic by building trust. And that’s the beginning of redeveloping neighborhoods in a healthy way. It’s a model that works.” 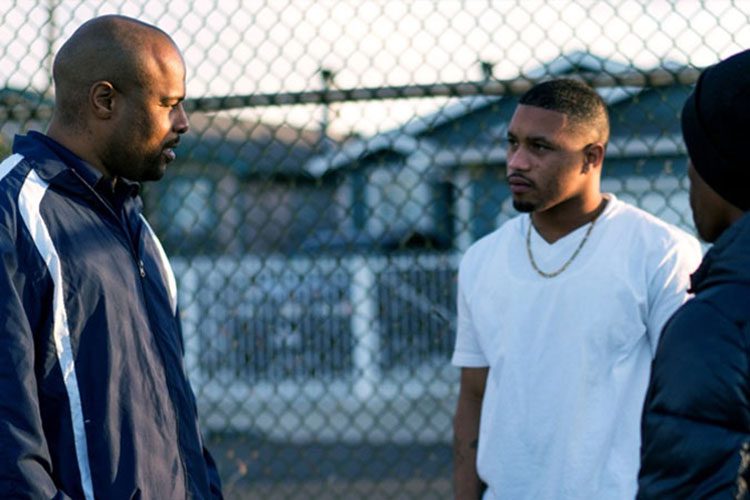 For Corburn, the success of the program is intrinsically linked to his interest in public health and racial justice. He has worked with community groups and city officials around the Bay Area for over 10 years to provide a health equity lens to reducing violence in communities of color.

In an attempt to curb the city’s gun violence, Boggan created the Peacemaker Fellowship to empower formerly incarcerated community members to enroll perpetrators of gun violence in the area, as fellows. Over 18 months, those fellows — predominately Black men ranging in age from 13 to 30 — were given 24/7 adult mentorship, including help with navigating social services, education and employment resources.

Neighborhood change agents also mediate violent conflicts, and help fellows cope with anger management. Moreover, to create long-term goals for fellows to sustain beyond the program, monthly allowances, paid internships and/or travel stipends are provided as those goals are reached. 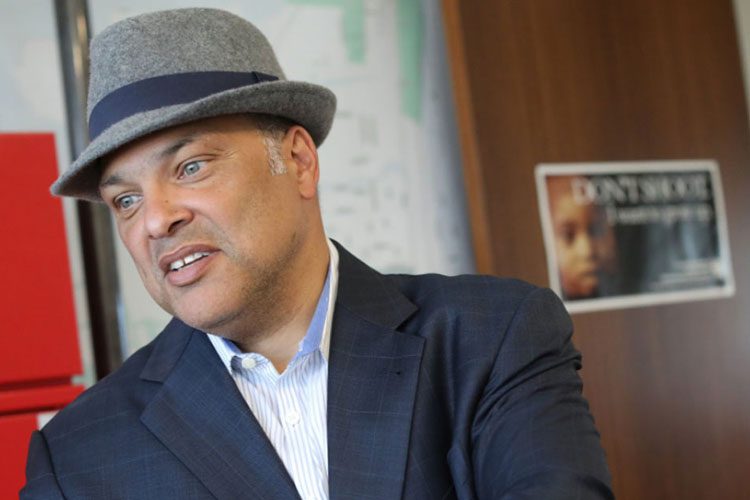 Advance Peace founder DeVone Boggan, a UC Berkeley alumnus, used his over 25 years of experience in youth and community development to create the peace fellowship. “This program is literally like my baby,” he said. “I hope it continues to grow to make a big difference in the world.”Photo: Advance Peace

That model would become what Advance Peace is today, said Corburn, who has since become the program’s lead researcher. Since March 2016, the program has expanded from Richmond and into Sacramento, Stockton, Fresno and Oakland. Most recently, New York City Mayor Bill De Blasio announced they will launch Advance Peace in five precincts this July.

While the initiative was initially seen as controversial, Boggan said to tackle gun crimes cities have to be willing to directly engage individuals at the center of that violence.

“The closest people to the problem are usually the closest to the solution,” he said.

Prior to joining Advance Peace, Sam Vaughn, a Richmond native, served time in San Quentin State Prison for a gun assault charge, and became a Neighborhood Change Agent shortly after being released in 2008.

Vaughn now serves as program manager for Richmond’s Office of Neighborhood Safety, and has contributed to the city’s sustained decreases in gun homicides and assaults that have ranged from 55% to 82% over the past decade. Building trust with his fellows has been essential, said Vaughn, something police have lost in his community over the years.

“For a police officer, or somebody from outside of the city, to come and tell folks in Richmond how to deal with, or get over, trauma that they never experienced, our fellows would say ‘I don’t trust you, and I don’t think you have a clue as to what I’m going through,’” Vaughn said. “There is a level of authenticity we bring because we do this out of love for our community. This is where we’re from. And that love is rooted in the relationships we build with them.” 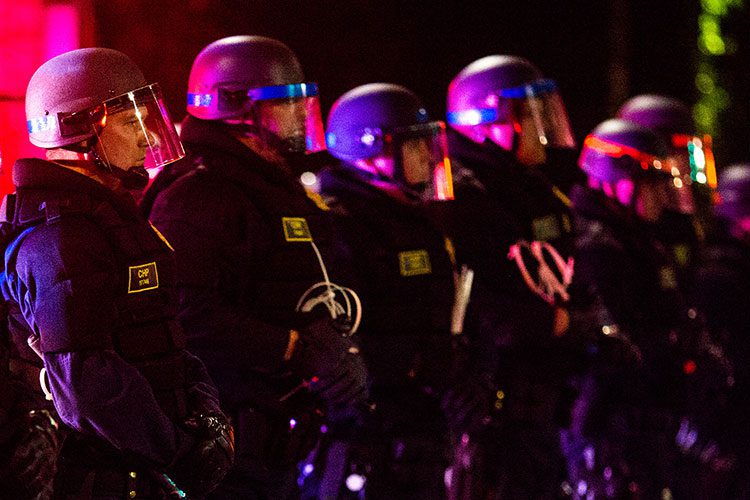 According to a recent UC Berkeley poll, a strong majority of Californians favor reforms to stem police violence, particularly against Black and Latino communities.Photo: Thomas Hawk via Flickr

While Corburn’s research shows the undeniable impact that Advance Peace has had in urban communities in California, he said funding for the work is still sparse compared to police departments that attempt to implement similar initiatives that aren’t as successful.

“Police often see programs like this as a threat to them, or as something that will take away one of their responsibilities,” said Corburn. “And that’s just not the case. Advance Peace fills a void in the community that police can’t address. And they are doing so on a limited budget.” 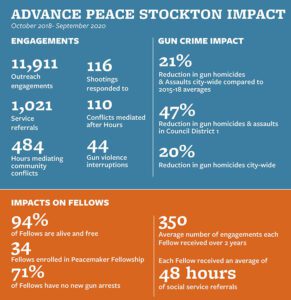 Corburn’s research showed the effects the Advance Peace program had in Stockton between October 2018 and September 2020.Photo: Hulda Nelson

On average, American cities allocate 20% to 45% of their discretionary funds to police, according to a report by The Center for Popular Democracy. While police budgets vary based on the size of their cities and jurisdictions, Boggan said police departments often spend less than 7% of their time responding to violent crimes, meaning police funds aren’t sufficiently being used to reduce gun violence.

Although former Stockton Mayor Michael Tubbs was an adamant supporter of Advance Peace when it was implemented in January 2018, and helped to secure independent funding, Brian Muhammad, who manages Advance Peace Stockton, said, “We haven’t gotten a dime from the city.”

“We’ve had support from private donors and foundations. It has its pros and cons. We don’t have to worry about playing politics to retain funds, but we have about a year and a half to go with the funding that we have currently.”

Advance Peace Chief Operating Officer Khaalid Muttaqi said the cities that do provide funding to Advance Peace often underfund community prevention programs that do a lot of the heavy lifting. 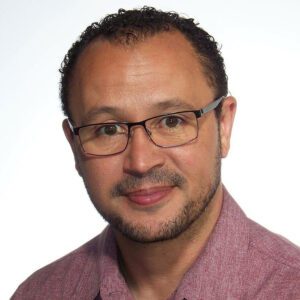 In January 2018, the City of Sacramento committed to provide Advance Peace with $375,000 a year, equaling $1.5 million over four years. Sacramento’s police department receives $157 million annually, said Muttaqi, which is nearly 50% of the entire city budget.

“Funding a 25-member police gang unit can do more harm than good,” said Muttaqi. “Because when police come and bust in somebody’s house, make an arrest, and people in the neighborhood see them exercising extreme amounts of force, that translates into police brutality. It causes trauma. Any trust that was there between the community and the police goes away.”

According to data collected by the Washington Post, around 1,000 people are shot and killed by the police in the U.S. each year, and Black men are more than twice as likely to be victims as white men. Following the police killing of George Floyd last summer, the movement to “defund the police,” Boggan said, has been misunderstood.

“I’d rather say ‘defund fear,’” he said. “At the end of the day, that’s what needs to happen. The carceral system has scared people into believing that there is no better option than to increase policing to feel safe. But we’ve now overfunded and made investments into policing, and we’ve defunded all of the other life-affirming infrastructures that a healthy society needs.”

Advance Peace Fresno currently operates through independent and city funding. This video highlights how the program has impacted neighborhoods in that city.

Berkeley African American Studies professor Nikki Jones has researched how the criminal justice system and policing of Black people has historically caused trauma in those communities. Jones chronicled her research in her award-winning book The Chosen Ones: Black Men and the Politics of Redemption. 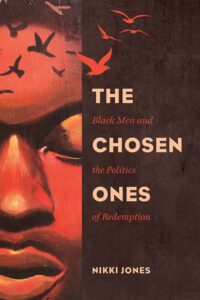 In that book, Jones delves into the reasons why violence persists in America’s inner cities, despite the presence of substantial funding and resources within policing. The strategy of funding more police to counteract a rise in gun violence and crime in urban communities, Jones said, is not effective, rather, programs like Advance Peace can bring transformative change to the criminal justice system.

“It’s important to amplify those programs out there that are rooted in ideas of love and the value of empowering communities, as opposed to taking from them,” said Jones. “We’ve supported the idea that law enforcement has a legitimate monopoly on providing public safety. But we have to remember that the police exist to control Black people, and other ‘problematic’ populations. That’s deep in American history.”

The foundation of that racist structure in American law enforcement, Corburn said, contributes to the underfunding of programs like Advance Peace, as cities have historically been beholden to funding their police departments and police unions over investing in Black communities.

“A program like Advance Peace can be somewhat of a litmus test for whether cities really believe Black lives matter,” said Muttaqi, who is also a Berkeley alumnus. “We empower Black and Brown men to put the public at the center of public safety. These individuals have turned their trauma into triumph, turned their pain and suffering into strengths and assets. They’ve become peacemakers.” 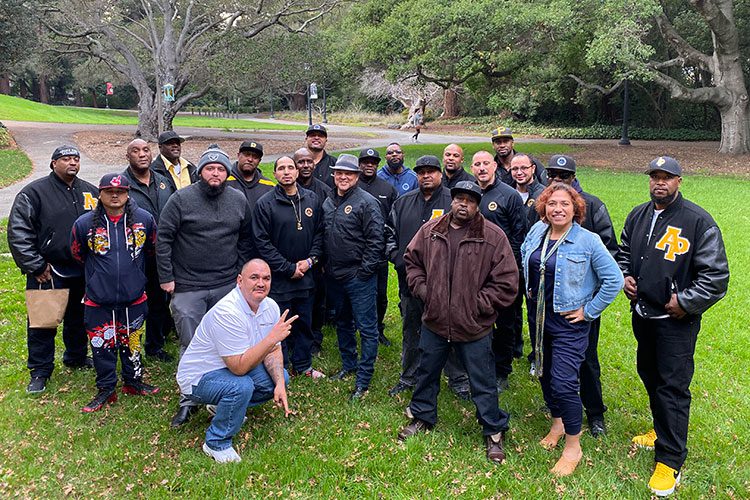 As a field coordinator for Advance Peace Stockton, Maurice Goens said the pandemic has changed the way they engage with their fellows, but “it’s still a 24-hour job.”

Goens and other change agents will often stay up late into the night listening to police scanners to respond to shooting incidents in the city, or deliver supplies and basic needs to their fellows, many of whom live paycheck to paycheck.

“You’ve got to have the passion for it. You’ve got to do it from the heart,” said Goens. “If one of my guys calls me at midnight and needs some help, or somebody to talk them out of a bad situation, I’m not going to turn my phone off because it’s after five o’clock.”