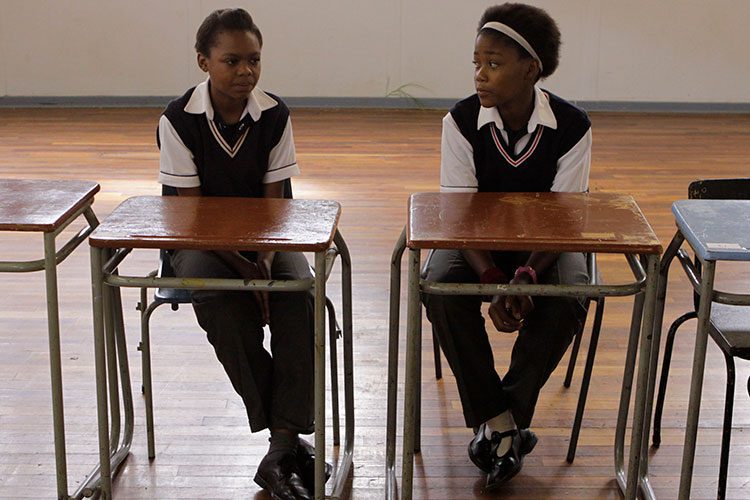 South African Actresses Khomotso Manyaka, right, and Keaoboka Makanyane, left, starred in the 2010 Oscar-nominated film “Life, above all,” a drama about the impact of the impact of HIV-AIDS in their country. A new UC Berkeley-led analysis suggests that addressing the mental health needs of teen women in South Africa may help stem the spread of the disease.Photo: Denis Farrell / AP

Teen girls in South Africa face an extraordinary threat of HIV: By the time they reach adulthood, one in four South African girls will have contracted the virus, and most are first infected during adolescence.

The findings, which appear online in the American Journal of Epidemiology, suggest that interventions targeted at improving mental health among adolescent girls may help stem the spread of HIV in South Africa and throughout the rest of sub-Saharan Africa.

“We’ve known that depression and HIV go together for decades, but no one has known which way the arrow goes: Does depression lead to HIV or does HIV lead to depression?” said Jennifer Ahern, professor of epidemiology at UC Berkeley and senior author on the study. “Probably it goes both ways, but we were able to show that, at least in this population, the arrow certainly goes one way, which is depression leads to HIV. This could have important implications for where interventions might lie.”

As part of the study, the team looked at which aspects of teens’ social lives and behaviors might explain the relationship between depression and HIV incidence. Teen girls who experienced symptoms of depression were later more likely to report not having close relationships with their parents, and having a partner who would hit her if she asked him to wear a condom. These factors appeared to be part of the pathway to contracting HIV.

“Partner violence in response to condom negotiations, and a lack of parental monitoring, had the strongest association with both depression and HIV, which indicates that the majority of the relationship between depression and HIV may be influenced through those factors,” said Dana Goin, a postdoctoral scholar in the Department of Obstetrics, Gynecology, and Reproductive Sciences at the University of California, San Francisco, and lead author of the study.

“The results illustrate how so much of infection among this population has to do with structural factors,” said Goin, who completed the work as a PhD candidate in epidemiology at UC Berkeley.

The study drew on data collected from 2,533 women between the ages of 13 and 21 living in rural Mpumalanga Province, South Africa. Each teen was screened for symptoms of depression at the beginning of the study, and then tested for HIV annually for six years.

A little more than 18% of the adolescents had depression at the outset of the study — about twice the national average of South Africa. Of those with depression, nearly 11 percent went on to contract HIV, while only 6.5% of those without depression eventually became infected.

While a previous study has shown that depression can lead to higher incidence of HIV in men who have sex with men in the U.S., this is the first study to examine the relationship among girls and young women in sub-Saharan Africa.

Though residents in rural South Africa have limited access to mental health services, Ahern and Goin’s collaborators at Oxford University and at the University of the Witwatersrand in South Africa are currently working to develop community-based interventions that can help identify and support girls who are experiencing depression.

“There is increasing evidence that proven psychological treatments for depression, such as behavioral activation, can be delivered by lay counsellors and community healthcare workers, which provides a feasible way of delivering treatment for depression in the community,” said Alan Stein, a professor of child and adolescent psychiatry at the University of Oxford. “There is also the possibility of delivering these kinds of treatments using the internet or mobile phones, with the support of phone calls from peer mentors, and this is something we are working on.”

“Many low- and middle- income settings, including much of Africa, lack skilled mental health personnel,” added Kathleen Kahn, a professor and senior scientist at the Medical Research Council / Wits University Rural Public Health and Health Transitions Research Unit (Agincourt) at the School of Public Health, University of the Witwatersrand and co-author on the paper. “Interventions that can be delivered by non-specialist workers — lay health workers or community health workers — and that are appropriate across different cultures should be vigorously pursued. This is what our work now focuses on.”