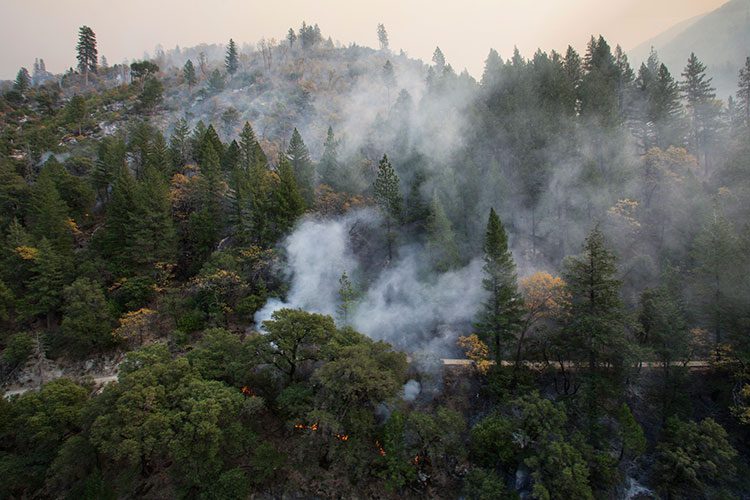 Air pollution from wildfires is known to exacerbate heart and lung conditions. A new study suggests that it can also harm the skin, worsening symptoms of eczema and itch.Photo: the California National Guard via Flickr

Wildfire smoke can trigger a host of respiratory and cardiovascular symptoms, ranging from a runny nose and cough to a potentially life-threatening heart attack or stroke. A new study suggests that the dangers posed by wildfire smoke may also extend to the largest organ in the human body and our first line of defense against outside threat: the skin.

During the two weeks in November 2018 when wildfire smoke from the Camp Fire choked the San Francisco Bay Area, health clinics in San Francisco saw an uptick in the number of patients visiting with concerns of eczema, also known as atopic dermatitis, and general itch, compared to the same time of the year in 2015 and 2016, the study found.

The study findings suggest that even short-term exposure to hazardous air quality from wildfire smoke can be damaging to skin health. The report, carried out by physician researchers at the University of California, San Francisco (UCSF), in collaboration with researchers at the University of California, Berkeley, appears April 21 in the journal JAMA Dermatology.

“Existing research on air pollution and health outcomes has focused primarily on cardiac and respiratory health outcomes, and understandably so. But there is a gap in the research connecting air pollution and skin health,” said study lead author Raj Fadadu, a student in the UC Berkeley-UCSF Joint Medical Program. “Skin is the largest organ of the human body, and it’s in constant interaction with the external environment. So, it makes sense that changes in the external environment, such as increases or decreases in air pollution, could affect our skin health.”

Air pollution from wildfires, which consists of fine particulate matter (PM2.5), polycyclic aromatic hydrocarbons (PAHs) and gases, can impact both normal and eczema-prone skin in a variety of ways. These pollutants often contain chemical compounds that act like keys, allowing them to slip past the skin’s outer barrier and penetrate into cells, where they can disrupt gene transcription, trigger oxidative stress or cause inflammation.

Eczema, or atopic dermatitis, is a chronic condition that affects the skin’s ability to serve as an effective barrier against environmental factors. Because the skin’s barrier has been compromised, people with this condition are prone to flare-ups of red, itchy skin in response to irritants, and may be even more prone to harm from air pollution.

“Skin is a very excellent physical barrier that separates us and protects us from the environment,” said study senior author Dr. Maria Wei, a dermatologist and melanoma specialist at UCSF. “However, there are certain skin disorders, such as atopic dermatitis, in which the barrier is not fully functional. It’s not normal even when you don’t have a rash. So, it would make sense that, when exposed to significant air pollution, people with this condition might see an effect on the skin.”

Earlier studies have found a link between atopic dermatitis and air pollution in cities with high background levels of air pollution from cars and industry. However, this is the first study to examine the impacts of a very short burst of extremely hazardous air from wildfires. Despite being located 175 miles away from the Camp Fire, San Francisco saw an approximately ninefold increase in baseline PM2.5 levels during the time of the blaze.

To conduct the study, the team examined data from more than 8,000 visits to dermatology clinics by both adults and children between October of 2015, 2016 and 2018 and each February of the year that followed. They found that, during the Camp Fire, clinic visits for atopic dermatitis and general itch increased significantly in both adult and pediatric patients.

“Fully 89% of the patients that had itch during the time of the Camp Fire did not have a known diagnosis of atopic dermatitis, suggesting that folks with normal skin also experienced irritation and/or absorption of toxins within a very short period of time,” Wei said.

While skin conditions like eczema and itch may not be as life-threatening as the respiratory and cardiovascular impacts of wildfire smoke, they can still severely impact people’s lives, the researchers said. The study also documented increased rates of prescribed medications, such as steroids, during times of high air pollution, suggesting that patients can experience severe symptoms.

Individuals can protect their skin during wildfire season by staying indoors, wearing clothing that covers the skin, if they do go outside, and using emollients, which can strengthen the skin’s barrier function. A new medication, Tapinarof, to treat eczema is now in clinical trials and could also be a useful tool during times of bad air.

“A lot of the conversations about the health implications of climate change and air pollution don’t focus on skin health, but it’s important to recognize that skin conditions do affect people’s quality of life, their social interactions and how they feel psychologically,” Fadadu said. “I hope that these health impacts can be more integrated into policies and discussions about the wide-ranging health effects of climate change and air pollution.”

Co-authors of the paper from UCSF are Barbara Grimes and Albert T. Young. From UC Berkeley: Nicholas P. Jewell. Co-authors also include Dr. Katrina Abuabara and Dr. John R. Balmes, who both have a dual appointment at UCSF and UC Berkeley; and Jason Vargo of the California Department of Public Health.