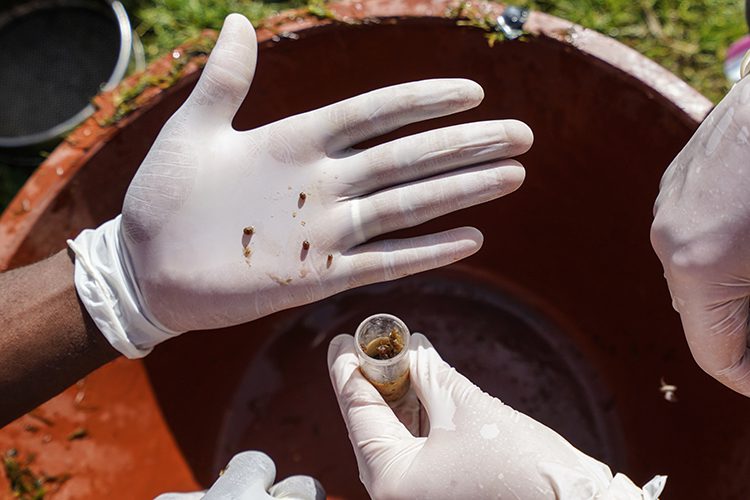 Agrochemical pollution of waterways, as a result of widespread use of insecticides, herbicides, and fertilizers, can alter the transmission of the parasitic disease schistosomiasis, according to a recent study from the University of California, Berkeley (UC Berkeley), partly funded by the NIH Fogarty International Center and National Institute of Allergy and Infectious Diseases. The findings published in Lancet Planetary Health show that agrochemicals can cause ecological disruption and affect the spread of the pathogen through the aquatic environment.

The schistosome parasite, commonly found in sub-Saharan Africa, the Middle East, Southeast Asia, and the Caribbean, lives and breeds in freshwater snails. Snail hosts release the pathogen into surface waters, leaving humans vulnerable to exposure. Health effects of schistosomiasis, also known as snail fever or bilharzia, in children can include the risk of anemia, undernutrition, and learning deficits. Chronic schistosomiasis in adults can lead to abdominal pain, enlarged liver, and certain cancers.

The disease affects 240 million people a year, second only to malaria in terms of its global impact among parasitic diseases. More than 700 million people live in endemic areas at risk of schistosomiasis. Agricultural expansion and increased use of pesticides may increase exposure to the disease, according to the study authors.

“Exposures to environmental pollutants most intensely harm the poor and disenfranchised, especially women and children,” said Justin Remais, Ph.D., study author and Chair of the Division of Environmental Health Sciences at UC Berkeley. “Our research shows that in adopting industrial agricultural practices, we are potentially adding to those risks by amplifying exposure to pathogens that cause infectious diseases that are highly prevalent in those same vulnerable populations.”

The authors found that key agrochemicals can affect the schistosome flatworm and its intermediate snail hosts in multiple ways. Herbicides, such as atrazine, were found to increase snail populations by encouraging algal growth, thus increasing snail food resources. Insecticides, such as chlorpyrifos and profenofos, can decrease the populations of snail predators. Combined, these impacts can facilitate schistosomiasis transmission and lead to greater microbial contamination of freshwater resources where individuals are exposed.

Findings from the Systematic Review and Modelling

The researchers conducted a systematic review of more than 850 studies and identified 144 cases connecting the schistosome lifestyle with concentrations of agrochemicals. The researchers then added the dose-response functions and concentration levels into a mathematical model to estimate agrochemical effects on schistosomiasis transmission and infection rates within human populations.

The results highlighted that certain common agrochemicals even at low concentrations had profound effects on disability-adjusted life-years (DALYs), a measure of overall disease burden that combines years of life lost and years lived with disability. According to the model, atrazine caused an estimated additional 64 DALYs lost per 100,000 people per year, while chlorpyrifos and profenofos contributed 6 and 103 DALYS lost per 100,000 people per year respectively.

In addition, the authors noted that some agrochemicals can directly lessen the survival of schistosome larvae, eggs, and snails, such as the herbicide glyphosate, which is toxic to the snails. Yet these population-reducing effects are offset by the way certain agrochemicals significantly boost algal growth, the snail’s food source, or reduce snail predation, yielding net increases in schistosome transmission even at low levels of agrochemical use. These indirect effects, as indicated in the study, tend to overwhelm any direct reduction of schistosome transmission and are more likely to occur in real-world settings.

“We need to link theory, methods, and data from toxicology, ecology, population dynamics, epidemiology, and the environmental sciences in order to better understand the interactions between microbial and chemical hazards, and their consequences for disease and population health,” said Remais. “Doing so strengthens our ability to predict and control infectious diseases that are sensitive to the presence of environmental chemicals, while also offering opportunities to improve chemical environmental quality and, potentially, ecosystem health.”

Separate from agricultural runoff, increases in human population density, land use changes, and ecological changes in schistosome endemic areas are also associated with increased exposure to the pathogen, according to the study.

Remais noted that there are protective measures that communities can take to reduce the transmission of schistosomiasis. Those include increasing access to improved sanitation, targeting snail populations that carry the pathogen, promoting health education to reduce dermal contact with contaminated surface waters, and treating those affected with drugs to reduce infections.

These potential solutions, along with innovative research methods, are beginning to examine the relationship between microbial and chemical hazards on global burden of disease.

“We are just beginning to understand the interaction between chemical and infectious agents that co-exist within the same environmental media,” said Remais. “Many regions that struggle to limit contamination of surface waters with infectious hazards, such as bacterial or viral enteric pathogens, are also coping with widespread contamination with chemical hazards associated with unregulated industrialization.”

This article was originally published in the NIEHS Global Environmental Health Newsletter.