Salinas Valley teens find green cleaning is worth the hype

In a new study, teenagers from California’s Salinas Valley worked alongside UC Berkeley scientists on research showing that switching to green cleaning products can reduce users’ exposure to a variety of toxic chemicals. The high school team also created a series of three animated public service announcements, in both English and Spanish, to share the results with their community. (LUCIR Study video)

Jessica Cabrera knows the recipe for homemade window cleaner by heart — and is more than happy to share it.

“All you have to do is mix vinegar, water and dish soap, and there you have it,” Cabrera said.

Cabrera, who grew up in California’s Salinas Valley, just started her first year as an undergraduate student at the University of California, Berkeley. And while it may seem unusual for a new college student to have a passion for window cleaner, Cabrera has good reason for knowing the ins and outs of DIY cleaning products.

For the past three years, Cabrera has been part of a group of Salinas Valley teens working alongside UC Berkeley researchers to investigate whether housecleaning products expose their users to potentially harmful chemicals — and whether making the switch to cleaning products marketed as lower chemical, or “green,” can help reduce these exposures.

Cabrera is now a co-author of a peer-reviewed study, published Sept. 1 in the journal Environmental Health Perspectives, showing that making the switch to green cleaning products can reduce users’ exposure to up to 17 different carcinogenic and endocrine-disrupting chemicals, including chloroform and benzene.

“What I found the most interesting was that there was an 86% decrease in chloroform exposure after switching from conventional cleaning products to green cleaning products,” Cabrera said. “And it really put into perspective how cleaning products can serve as potential carcinogens and hormone disruptors. It’s something that you don’t really think about when you clean because you think cleaning is a good thing. And it is, but it also can have some detrimental effects to your health in the long term.” 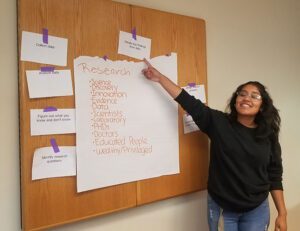 Stephanie Mayo-Burgos, a co-author of the new study, learned about community-engaged research as part of the CHAMACOS Youth Council.Photo: James Nolan

Cabrera and her peers carried out the research as part of the Center for the Health Assessment of Mothers and Children of Salinas (CHAMACOS) Youth Council, a group of 10 to 15 high school students who gain hands-on experience in environmental health research by helping to design and carry out their own studies under the guidance of UC Berkeley public health experts.

Study lead author Kim Harley, associate director of the UC Berkeley Center for Environmental Research and Children’s Health (CERCH), said that the youth council was originally created to give teens a voice in the CHAMACOS study, a long-term investigation into the impact of pesticides and other chemical exposure on pregnant women and their children. However, she and her colleagues quickly realized the potential of teaching and engaging the youth in conducting rigorous public health research, empowering them to become the next generation of environmental health leaders in their community.

Earlier research projects tackled by the youth council include an investigation into endocrine-disrupting chemicals in makeup, shampoos and lotions, and a study looking at the presence of pesticides in teens’ homes.

According to Harley, the council’s interest in cleaning products grew out of conversations about the importance of housecleaning in Latinx culture, as well as the fact that 81% of professional housecleaners and janitors in California are Latinx.

“For the CHAMACOS study, we asked people how often they clean their homes, and 40% of our population said that they do substantial housecleaning every day — and by substantial, they mean things like mopping their floors or vacuuming every day,” Harley said. “So, the youth council really felt like this was an environmental justice issue that was affecting their Latino community and particularly Latina women in California.”

One of the youth council’s main missions is to share the results of their research with their community. Since the COVID-19 pandemic forced the cancellation of most in-person events, the council decided to work with the group Artists Ink to create a series of animated public service announcements in both English and Spanish to help spread awareness about how people can protect themselves from potentially harmful chemicals in cleaning products. The students have also presented their results to regulators at the California Safer Consumer Products program.

“I’ve always been passionate about making an impact on my community, and I think the youth council is great because it targets the future of the community — the youth,” said study co-author Stephanie Mayo-Burgos, a recent member of the council who is now starting her first year as an undergraduate at UC Santa Cruz. “It starts off by educating us and then helps us educate our community.”

Stephanie Mayo-Burgos and Jessica Cabrera talk about the results of the LUCIR study and describe their experience as student researchers. (UC Berkeley video by Roxanne Makasdjian)

Cabrera remembers being a sophomore in high school, hungry and ready for lunch, when she first learned about the CHAMACOS Youth Council.

“My math teacher announced that there was a new research opportunity through CHAMACOS, and told us how the original mission of CHAMACOS was investigating the health impacts of pesticides among farmworkers and their children,” Cabrera said. “This hit home to me, because I come from a family of farmworkers. Both my grandfathers, my dad and even my mother all worked in the fields.”

Cabrera joined the youth council, and one of her first tasks, along with Mayo-Burgos, was to help choose the name and logo for the new project. They ended up deciding on LUCIR, which stands for Lifting Up Communities by Intervening with Research. 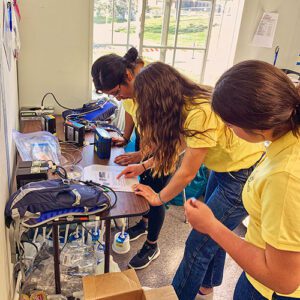 “LUCIR means ‘to shine,’ in Spanish, and we thought that name worked well because when you clean, you can make things look shiny and nice,” Cabrera said.

To conduct the study, the council worked closely with Harley and CERCH community science manager James Nolan to recruit 50 Latinas from their Salinas Valley community. Each woman was asked to spend 30 minutes cleaning her kitchen and bathroom using her normal cleaning products, and then repeat the process a week later using her choice of a selection of green cleaning products that the students had found at local stores.

While they cleaned, each woman wore a backpack outfitted with personal air monitoring equipment created by collaborators at Lawrence Berkeley National Laboratory. The backpacks, originally designed as hydration packs, had tubes that could collect samples of air near the women’s faces as they cleaned.

“The backpacks were important because we wanted to know what people’s actual exposure to the chemicals was,” Harley said. “The backpack can take little sips of air through tubes that sit on the shoulder, and we put the tubes close to the breathing zone of the mouth. We felt like this was a better way to gauge human exposure than just analyzing what was in the product because what we really care about is how much of these chemicals are going into the air that we are breathing in.”

The women’s measurements showed that the switch to green cleaning products decreased their  exposure to a variety of chemicals that may cause cancer, disrupt hormones in the body or act as reproductive toxins. However, the switch also increased the women’s exposure to some potentially harmful fragrance compounds.

While the study results showed that making the switch to green cleaning products can help reduce exposure to certain harmful chemicals, Mayo-Burgos points out that not everyone is in a position to change up their routines.

For one, it’s not always easy to identify which products are actually safer. Though a 2017 California law now requires that cleaning product manufacturers list their products on the label, there remains no standard definition for what products qualify as “green.” Concerned consumers can start by looking for the Safer Choice Label or consulting consumer databases, such as the Environmental Working Group Guide to Healthy Cleaning. However, not everyone has the time or money for to follow these guidelines.

“I would love to push people to get the green cleaning products, but I can tell that a lot of people in my community don’t believe in them or don’t have the time to buy them online,” Mayo-Burgos said. “So, I feel like it’s just as important to educate people about the amount of exposure that they experience and to teach them ways to reduce that exposure, like opening up windows, opening up doors and using a microfiber cloth that can clean surfaces without the need for cleaning products.”

Other ways to protect yourself while cleaning include wearing protective gear, like gloves and goggles, and not mixing products that could potentially react to form even more dangerous chemicals, Mayo-Burgos added.

Nolan said that this connection to the community is one of the reasons why the youth council is so important. 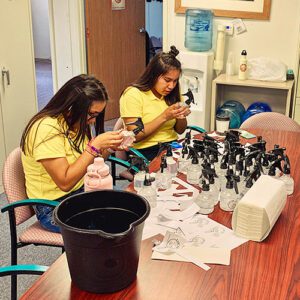 “The youth voice really brings this energy and creativity to the work, and they are also really approachable,” Nolan said. “One of our side missions has been to highlight other opportunities that they might not have thought about and think about ways that we can open as many doors as possible for them.”

Mayo-Burgos and Cabrera both said that they hope to pursue college degrees that will allow them to continue to help their community: Mayos-Burgos wants to major in environmental studies, while Cabrera would like to double major in public health and computer science.

“One of my long-term goals is to bring technological access back to my community because I believe that technology is also a major factor as to why people from my community aren’t always as informed as they can be,” Cabrera said. “My community really inspires me to want to continue learning and to bring what I learn back, so we can all benefit from it.”

In the final animated public service announcement, teens from the CHAMACOS Youth Council give tips for how to reduce your exposure to toxic chemicals while cleaning in the home (LUCIR Study video)