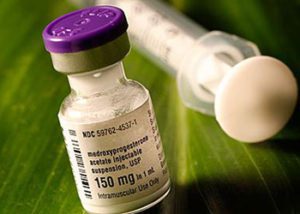 A UC Berkeley meta-analysis suggests use of Depo-Provera moderately increases the risk of HIV infection among women in sub-Saharan Africa.Photo: Image courtesy of the Mayo Clinic

A large meta-analysis of 12 studies in sub-Saharan Africa found that women who used a type of injectable birth control had a moderately increased risk of becoming infected with HIV. The analysis was conducted by UC Berkeley School of Public Health researchers.

The contraceptive, depot medroxyprogesterone acetate, is sold under the brand name Depo-Provera, and it is administered as a shot every three months.

The findings, published today (Thursday, Jan. 8) in The Lancet Infectious Diseases, included data from 39,500 women. The researchers selected the studies based upon methodological rigor, such as whether they accounted for the use of condoms.

In addition to Depo-Provera, the studies also examined other commonly prescribed forms of hormonal contraception, such as the injectable norethisterone oenanthate (sold as NET-EN), combined oral contraceptives and progestin-only pills. The other birth control methods did not appear to increase HIV infection risk for women in the general population.

“We embarked on this study because of the inconsistency in the scientific literature on this topic,” said study lead author Lauren Ralph, who did this research for her UC Berkeley PhD dissertation in epidemiology. “The results have potentially broad implications because hormonal contraceptives remain popular for women worldwide.”

Approximately 144 million women worldwide use hormonal contraception, and of those about 41 million women use injectable forms of birth control instead of the pill.

The study found that women who used depot medroxyprogesterone acetate had a moderate, 40 percent increased risk of acquiring HIV compared with women using non-hormonal methods and those not practicing birth control. The increased risk was slightly lower, 31 percent, among the studies done in women in the general population.

It remains unclear why the increased risk was seen among those using Depo-Provera but not the other forms of hormonal contraception, the authors said. One possibility may be that birth control with higher levels of progestin, the synthetic form of the natural hormone progesterone, changed the vaginal lining or altered local immunity, increasing the risk for HIV infection, though the researchers emphasized that this study did not examine the physiological effects of the different contraceptive methods and more research on potential underlying biologic mechanisms is needed.

The researchers cautioned that the increased HIV infection risk needs to be considered in the context of the risks associated with not using birth control.

“We do not believe that the findings merit withdrawal of this method of birth control for most women,” said Ralph. “There are significant risks associated with pregnancy and childbirth as well. It can be tricky to ensure a reliable supply of contraceptives in sub-Saharan Africa. Removing Depo-Provera doesn’t mean the women will have immediate access to other methods of birth control that are as effective. Ultimately, decisions around which birth control method to use should be made between a woman and her healthcare provider.”

The researchers noted that the results highlight the need for more studies among high-risk populations. Among the 12 studies analyzed, only two included sex workers or women with HIV-positive partners.

“The most important next steps for women all over the world are to examine ways to broaden women’s contraceptive options and increase uptake of other safe and effective contraceptive methods, and to step up research on new contraceptive methods, especially those that protect against both HIV and pregnancy,” said senior author Nancy Padian, a UC Berkeley adjunct professor of epidemiology.

Other co-authors of this study are Sandra McCoy, a UC Berkeley assistant adjunct professor of epidemiology, and Karen Shiu, who was a research analyst in Padian’s research group at the time of the study.