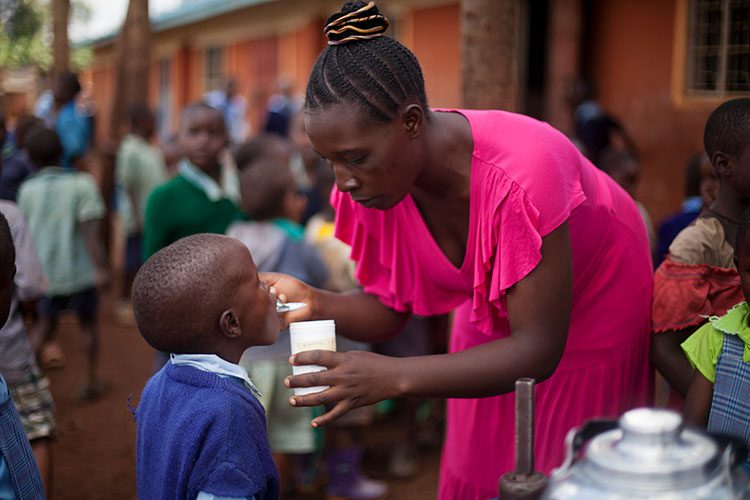 A young student receives medication for parasitic worms at a school in Vihiga County, Kenya, under an initiative created by the Evidence Action nongovernmental organization. New research led by Berkeley economist Edward Miguel has found that students who received deworming treatments for a longer period grew up to have higher incomes and higher standards of living. (Photo by Evidence Action)

Children who receive sustained treatment against common parasitic infections grow up to achieve a higher standard of living, with long-lasting health and economic benefits extending to their communities, according to new findings from a research team led by a University of California, Berkeley, economist.

The pioneering study, focused on Kenya and covering 20 years, found that children who receive a few extra years of deworming treatment — costing as little as 50 cents a year — eventually have better jobs and higher incomes than those who got less treatment.

“We found that, in Kenya, this modest investment led to significant improvements in the lives of infected individuals and for whole communities, and the benefits are long-lasting,” said lead author Edward Miguel, a UC Berkeley development economist. “But parasitic infections remain prevalent in many low-income countries, and there’s a resurgence in some poor, rural, low-income areas of the United States. Clearly, this research can serve as a guide to policymakers in much of the world.”

Co-author Michael Kremer, a Harvard University economist who shared the 2019 Nobel Prize in economics for developing novel ways to research poverty, added that the new findings provide an unanticipated warning about the COVID-19 pandemic: Students who lose a year or more of school — and school-based social services — suffer lasting negative impact on their work and earning power.

“These results show that school-based deworming can have an incredibly high rate of return,” said Kremer. “In the current context of Kenya and other countries, many investments in health and education have been interrupted by COVID-19. Finding a way to resume them will be critical for the next generation of children.”

The new research was published today (Aug. 3, 2020) as a working paper by the National Bureau of Economic Research (NBER).

Miguel is the Oxfam Professor in Environmental and Resource Economics at UC Berkeley and faculty director of the Center for Effective Global Action (CEGA), a hub on campus for research on global development.

One-fifth of the global population is infected

According to the World Health Organization, about 1.5 billion people — roughly 20% of the global population — are infected with the parasitic worms such as hookworm, roundworm and whipworm, which infect the intestines, and schistosomiasis, which infects the blood vessels. 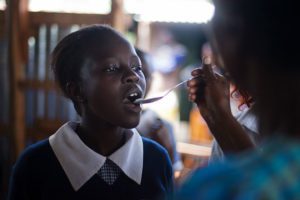 A young woman at a school in Vihiga County, Kenya, receives medication under the international Deworm the World initiative. When students suffer from parasitic worms, symptoms such as stomach pain and fatigue can disrupt their studies. If left untreated, the infection can impair physical and mental development and harm their long-term work and economic prospects. (Photo © Evidence Action)

Globally, more than 868 million children are at risk, according to Evidence Action, a nongovernmental organization (NGO) that runs the Deworm the World Initiative.

The risk is concentrated in warm, damp climates where low-income communities have poor sanitation. When infected people defecate in the open, the parasites’ eggs contaminate the soil or fresh water; then, for example, the tiny worms might penetrate the feet of passersby and work their way up to the hosts’ intestines.

And, experts say, climate change may increase the potential for worm infections. With a greater incidence of heavy storms in some regions, floodwaters can carry the worms or their eggs to new locations, even into homes, raising the threat to humans.

The health impacts can range from mild to severe, depending on the degree of infection. Children may experience stomach ailments and fatigue, which disrupt their concentration at school or keep them home. The infections cause nutritional deficiency and can lead to anemia, and also have been linked to impaired physical and mental development.

In 1998, an NGO started the Primary School Deworming Project, using the schools in the Busia District (now Busia County) of Western Kenya as a focus of treatment efforts. Preliminary research found that infection rates were over 90% — in effect, everyone in the district was infected.

But because of the NGO’s financial and administrative constraints, a decision was made to phase in the treatment: Students at 50 schools were selected to begin health education and deworming treatment in 1998 or 1999, while students at 25 other schools received the treatment starting in 2001.

Miguel and Kremer evaluated the Kenyan program in 2004 and found a clear positive impact: School absenteeism was cut by at least 25%, with the greatest improvements among young students. Deworming “substantially improved” school attendance, even among untreated students, they found, because treatment reduced the prevalence of worm eggs in the area.

Deworm the World was founded after the 2004 study by Miguel and Kremer, and subsequently governments in Kenya and globally adopted ambitious anti-worm programs, dramatically improving life for hundreds of millions of children.

The new research is based on treatment outcomes after 20 years, one of the longest study periods ever achieved for parasitic worm infections and interventions. The researchers tracked the former students as they grew up and transitioned to adult life, even those who moved within Kenya or migrated to other countries.

They found that students who received two or three years of extra treatment in the early years of the program reported significant benefits as mature adults:

Overall, the small investment in deworming treatment produced an annualized 37% rate of return.“You might assume that, in a program like this, for children, you would get some transient gain, but that people would eventually go back to the way they were,” Miguel said. “But we’re showing that, even 20 years later, there are measurable, meaningful improvements in the quality of life for these individuals.”

This has a direct bearing on poverty in a community, or a country. When hundreds of individuals in a community can be freed from infection, he explained, their improved health and education can help unlock the community’s development potential.

The impact of pioneering methodology

One of the primary accomplishments of the research project has been its pioneering use of randomized controlled trials. While a variety of factors might ultimately contribute to an individual’s health and success in adulthood, such trials allow the researchers to isolate the impact of a single factor. In effect, they can put parental support or educational success aside and look only at the effect of the deworming program. 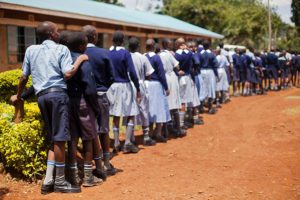 Ambitious programs to provide de-worming medication to Kenyan students bring broad, long-term health and economic benefits both to individuals and to entire communities, according to new research from a team led by UC Berkeley economist Edward Miguel. [Photo © Evidence Action]

The Nobel Committee cited Kremer’s development of such research techniques in awarding him the economics prize last year and specifically noted the team’s work on deworming in Kenya. For Miguel, too, the prize was a profound affirmation of his work.

Now, said Miguel, the researchers are moving toward new questions. They want to see if the benefits achieved by one generation in Kenya carry over to the next, and why men seem to benefit economically more than women. While deworming research has helped countries such as Kenya and India to achieve great human benefit, he added, the research evidence still must be carried to policymakers, medical workers and the public in many other low- and middle-income countries.

But, like Kremer, Miguel said the COVID-19 pandemic confronts policymakers with an immediate challenge: In many low-income areas, schools are a center of social support where students receive meals and medical care, including deworming medication. If school is suspended, as it is currently in Kenya and many other countries, students may miss out on that support.

“For these kids,” Miguel said, “losing a couple of years of schooling can have really bad consequences. They need a response right now to find a way to deliver at least some of those services.”

The other co-authors of the new research are Joan Hamory at the University of Oklahoma; Michael Walker, a postdoctoral scholar at CEGA; and Sarah Baird at George Washington University.

The research project has received sustained support from the U.S. National Institutes of Health and was funded in part by GiveWell.