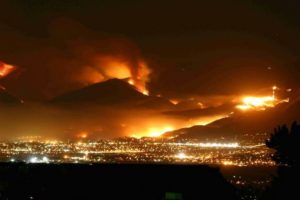 The scientists examined birth records in areas affected by smoke from seven fires — including the Old Fire that burned across the mountains and into the city of San Bernardino — that altogether consumed 750,000 acres. The results of the study were published online Wednesday, Sept. 5, in the journal Environmental Health Perspectives.

The differences in the newborns’ weights were small, slightly less than 10 grams for those exposed during the second trimester of the pregnancy, but the finding was significant, said co-author Rachel Morello-Frosch, associate professor at the UC Berkeley School of Public Health.

The study shows that climate change can affect health, she said, pointing out that wildfires are expected to become more frequent as the planet warms.

Smoke from such fires also could make a bad situation worse. The Inland region does not meet clean air standards for soot and other fine-particle pollution that has been linked in other research to low birth weights.

Still, the effect from fires alone is slight, Morello-Frosch said. By comparison, women who smoke cigarettes have babies whose weight is reduced by as much as 150 grams.

The Berkeley researchers looked at birth records of 886,030 babies, including 138,444 whose mothers lived in smoke-exposed areas during the 2003 fires. The women exposed to the smoke had babies whose birth weights were measurably lower, although the differences varied according to the stage of pregnancy. Fetuses exposed during the third trimester were 7.0 grams smaller. For the second trimester, the difference was 9.7 grams, and, for the first trimester, 3.3 grams.