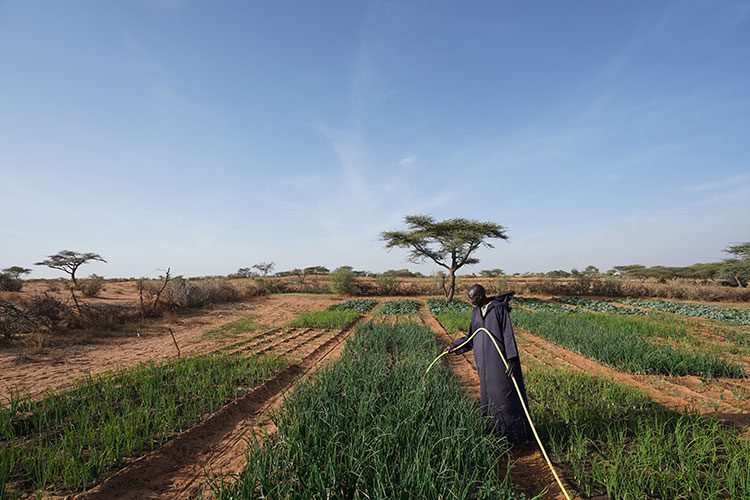 A man waters his crops near Lampsar, a community about 12 miles from the city of Saint Louis in the lower Senegal River Basin in West Africa. (Planetary Health Alliance photo by Hillary Duff)

Widespread use of pesticides and other agrochemicals can speed the transmission of the debilitating disease schistosomiasis, while also upsetting the ecological balances in aquatic environments that prevent infections, finds a new study led by researchers at the University of California, Berkeley.

Schistosomiasis, also known as snail fever, is caused by parasitic worms that develop and multiply inside freshwater snails and is transmitted through contact with contaminated water. The infection, which can trigger lifelong liver and kidney damage, affects hundreds of millions of people every year and is second only to malaria among parasitic diseases, in terms of its global impact on human health.

The study, published in the July edition of the journal Lancet Planetary Health, found that agrochemicals can increase the transmission of the schistosome worm in myriad ways: by directly affecting the survival of the waterborne parasite itself, by decimating aquatic predators that feed on the snails that carry the parasite and by altering the composition of algae in the water, which provides a major food source for snails.

“We know that dam construction and irrigation expansion increase schistosomiasis transmission in low-income settings by disrupting freshwater ecosystems,” said UC Berkeley’s Christopher Hoover, a doctoral student in environmental health sciences and lead author of the study. “We were shocked by the strength of evidence we found also linking agrochemical pollution to the amplification of schistosomiasis transmission.”

The findings come as the connections between environment and infectious disease have been laid bare by the COVID-19 pandemic, which is caused by an emerging pathogen thought to be linked to wildlife.

“Environmental pollutants can increase our exposure and susceptibility to infectious diseases,” said Justin Remais, chair of the Division of Environmental Health Sciences at the UC Berkeley School of Public Health and senior author of the study. “From dioxins decreasing resistance to influenza virus, to air pollutants increasing COVID-19 mortality, to arsenic impacting lower respiratory tract and enteric infections — research has shown that reducing pollution is an important way to protect populations from infectious diseases.”

After combing through nearly 1,000 studies gathered in a systematic literature review, the research team identified 144 experiments that provided data connecting agrochemical concentrations to components of the schistosome life cycle. They then incorporated these data into a mathematical model that captures the transmission dynamics of the parasite. The model simulates concentrations of common agrochemicals following their application to agricultural fields and estimates the resulting impacts on infections in the nearby human population.

The researchers found that even low concentrations of common pesticides — including atrazine, glyphosate and chlorpyrifos — can increase rates of transmission and interfere with efforts to control schistosomiasis. Agrochemical amplification of parasite transmission was not inconsequential. In the study communities in the Senegal River Basin in West Africa, the excess burden of disease attributable to agrochemical pollution was on par with disease caused by lead exposure, high sodium diets and low physical activity.

“We need to develop policies that protect public health by limiting the amplification of schistosomiasis transmission by agrochemical pollution,” Hoover said. “More than 90% of schistosomiasis cases occur in areas of sub-Saharan Africa, where agrochemical use is expanding. If we can devise ways to maintain the agricultural benefits of these chemicals, while limiting their overuse in schistosomiasis-endemic areas, we could prevent additional harm to public health within communities that already experience a high and unacceptable burden of disease.”