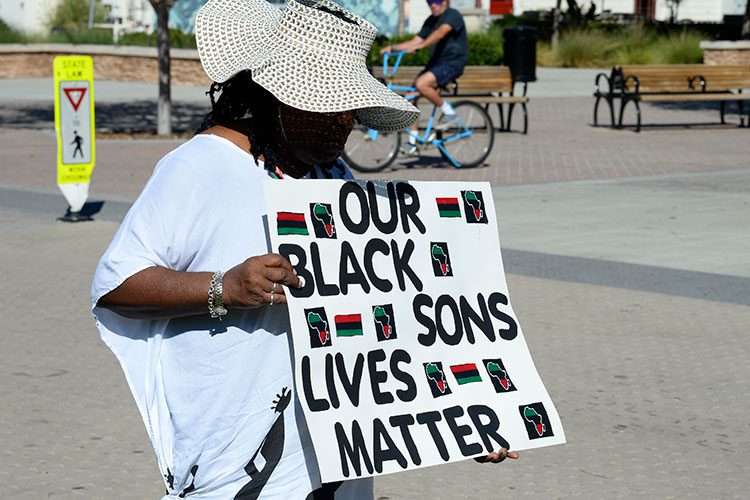 A protester holds a sign during a 2016 march in El Cajon, Calif., in reaction to the fatal police shooting of an unarmed Black man, Alfred Olango. Olango, a Ugandan refugee, was experiencing a mental health crisis at the time of the shooting. (AP photo by Denis Poroy)

The widely reported deaths of Michael Brown and Philando Castile reflect a grim truth in this country: According to data collected by The Washington Post, around 1,000 people are shot and killed by the police in the U.S. each year, and Black men are more than twice as likely to be victims as white men.

These inequities become even more stark for older and mentally ill, unarmed Black men, finds a new analysis which appeared online last month in the journal Annals of Epidemiology.

“The media have exposed the fact that there may be a disproportionate killing of unarmed men, Black men, in particular, and this is now considered not just a public health issue, but a public health crisis,” said study lead author Marilyn Thomas, who completed the analysis as a doctoral student at UC Berkeley’s School of Public Health. “Our analysis has found that, among those who happen to be killed by police, there are clear subpopulations that seem to be more vulnerable.”

The study, which focused on how race and armed status affects the risk of being shot by police, also revealed geographic differences, with racial inequities in the killing of unarmed Black and white men being more pronounced in the South, the study found.

“Right now, there is a lot of national attention being given to excessive use of force by police, which, unfortunately, we have seen result in the killing primarily of unarmed Black and brown people in this country,” said Amani Allen, executive associate dean of the UC Berkeley School of Public Health and senior author of the study. “Our results are particularly timely because they add actual scientific evidence to the deaths we are seeing in the media, which to some may seem like one-off events.”

Lack of accurate data has long stymied efforts to understand who is most at risk of being killed by police action in the U.S. Statistics reported by the federal government, such as the FBI’s annual list of “justifiable homicides by law enforcement,” are notoriously inaccurate: A 2015 study found that the FBI’s count missed more than half of the people killed by law enforcement each year.

After the high-profile deaths of Eric Garner, Michael Brown and Tamir Rice in 2014, the Guardian and the Post both launched projects to track the numbers and demographics of people who are shot and killed by police. These databases, combined with numbers from the Fatal Encounters project, which has been tracking fatalities at the hands of police since 2000, have finally given health and social scientists the data needed to understand how race and other factors contribute to police killings.

The intersections of age and mental illness

To conduct the analysis, Thomas used data on nearly 3,000 law enforcement-related fatalities of Black and white men collected by the Post’s Fatal Force project between 2015 and 2019. Of those, 212 men were reported as unarmed when they were shot.

Because Thomas only had data on men who were killed by police — not on those armed or unarmed men who were patrolled by police, but not ultimately shot and killed — she lacked what researchers call a “control group,” a group used as a benchmark to validate the study findings. As a result, she used a form of statistical analysis called case-only design, which eliminates the need for controls. 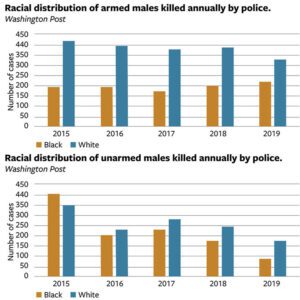 A breakdown of the number of Black and white men shot and killed by the police every year from 2015 to 2019, according to The Washington Post’s Fatal Force project. Each year, about half as many Black men are fatally shot while armed compared to white men, and the number of Black and white men fatally shot while unarmed is approximately equal. (UC Berkeley graphic by Hulda Nelson)

Thomas found that, overall, there was no racial difference in the risk of being unarmed when killed by police, when other contributing factors were accounted for. However, she did find significant inequities when she broke the data down by age, signs of mental illness and region.

The finding that older Black men face such a dramatically higher risk of being killed while unarmed, compared to white men of the same age, was surprising to Thomas, given that much of the media attention surrounding the police killing of Black males focuses on younger Black men and even Black children, like Tamir Rice.

“In the older population, Black males are five times more likely to be unarmed when killed by police than white males. That’s an incredible inequity,” Thomas said. “Police use of force is sanctioned against those civilians who are perceived as a threat. There’s a disproportionate sense of threat here, and so we have to think about what could be driving that.”

Denise Herd, professor of community health sciences at UC Berkeley’s School of Public Health, who was not involved in the study, points out that older Black males may be suffering from chronic physical or mental illnesses, including dementia, that may make them more vulnerable to police violence. They may also be experiencing homelessness or have lost some of the familial or social ties that protect younger men.

“The people who are most vulnerable to police violence are the people who are falling through the cracks in our public health system,” Herd said. “This is an age group where people have had cumulative disadvantages.”

Mental illness, unlike age, is its own risk factor for police violence. The Fatal Force project found that approximately one in four people shot and killed by police were experiencing a mental or emotional crisis at the time of the shooting.

However, the finding that Black men exhibiting signs of mental illness are also at higher risk of police killing than white men, particularly while unarmed, is indicative of a concerning pattern in policing: While white men with mental illness are more likely to be given treatment, Black men with similar behaviors are more likely to be criminalized for their actions.

“Black people are much more likely to have psychiatric disorders, whereas white people are more likely to get mental health treatment and intervention,” Thomas said. “What that leads to, and what we see in our criminal system right now, is an overrepresentation of people with severe mental illness, because they are being taken to jail or being assaulted or injured and ending up in the hospital rather than getting the mental health intervention that they need.”

“We have to really look at what’s happening within these policing organizations and interrogate the policies, the practices, the trainings and the culture in police departments that are leading to these results,” Allen said.

The tip of the iceberg

The results, paired with the limitations of the case-only design approach, highlight the need for more research into the disproportionate impacts of police killing — and, more importantly, more reliable data, Thomas said.

“The fact that we had to use data from publicly available media sources is problematic; it shouldn’t be that way,” Thomas said. “We should have a national registry where these data are available for analyses, so that we can intervene in this public health crisis, like it is a crisis.”

The hundreds of Black people who are shot and killed by police each year only represent a sliver of the public health crisis that results from disproportionate police violence on this community, Herd added.

For example, the collective grief, stress and social fragmentation that result from this kind of violence can lead to long-term mental distress and even physical illness and death. In April, public health experts at UC Berkeley argued that the stress of police violence may be contributing to the disproportionate impact of COVID-19 on the Black population.

In addition, police violence also causes many more serious injuries than deaths, and research has found that, between 2001 to 2014, emergency departments in hospitals treated 683,000 people for injuries caused by police.

“I think police violence has a tremendous effect that is still not fully recognized,” Herd said “Police killings are just the tip of the iceberg.”