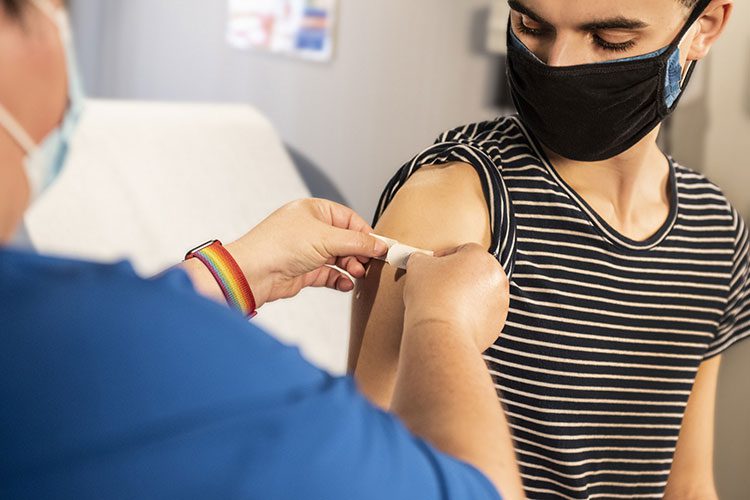 In California, opinions on the COVID-19 vaccination — whether to get it, and whether businesses should be allowed to mandate it for employees and customers — are inextricably tied to politics and ideology, according to the latest report from the UC Berkeley Institute for Governmental Studies.

Despite ongoing controversy over COVID-19 vaccines, a clear majority of California voters say it’s appropriate for some businesses to require customers and employees to be vaccinated, according to a new poll from the UC Berkeley Institute for Governmental Studies (IGS).

By a margin of nearly 2-1, respondents to the new Berkeley IGS Poll said that businesses such as concert venues, sports stadiums, casinos and cruise ships should be allowed to deny entry to customers who can’t verify their vaccinations or a negative COVID-19 test. Similarly, 61% of the voters said that certain classes of business should be able to require that their employees be vaccinated.

But the poll found deep partisan divisions. Compared to Democrats and those with no party preference, Republicans and conservatives were far less likely to be vaccinated and far more likely to oppose the power of businesses to mandate vaccinations. Further, Republicans were more strongly opposed to a role for government in setting standards for vaccine verification.

“Even at this later stage, politics powerfully shapes the way that Californians think about vaccination and the reopening of society,” said IGS co-Director G. Cristina Mora.

The new poll reflects the same deep partisan and ideological divides that were first detailed in a Berkeley IGS Poll a year ago. In May 2020, it found that supporters of then-President Donald Trump were less concerned that they would infect other people and more worried about the economy.

In February 2021, the pollsters reported that California Republican voters were far less likely than other voters to seek a vaccine and less supportive of small businesses, health care workers and other at-risk workers.

As effective vaccinations have come online in 2021, public health officials have said that high rates of vaccination are essential for controlling the pandemic and safely reopening businesses, schools and public events. But the new Berkeley IGS Poll shows that the gulf persists between Republicans and conservatives on one side and Democrats and liberals on the other:

The Berkeley IGS Poll was conducted online, in English and Spanish, from April 29 to May 5, and is based on the responses of 10,289 California registered voters. The margin of error is plus or minus 2.5 percentage points.