What are the dangers of pesticides for families living near agricultural fields? 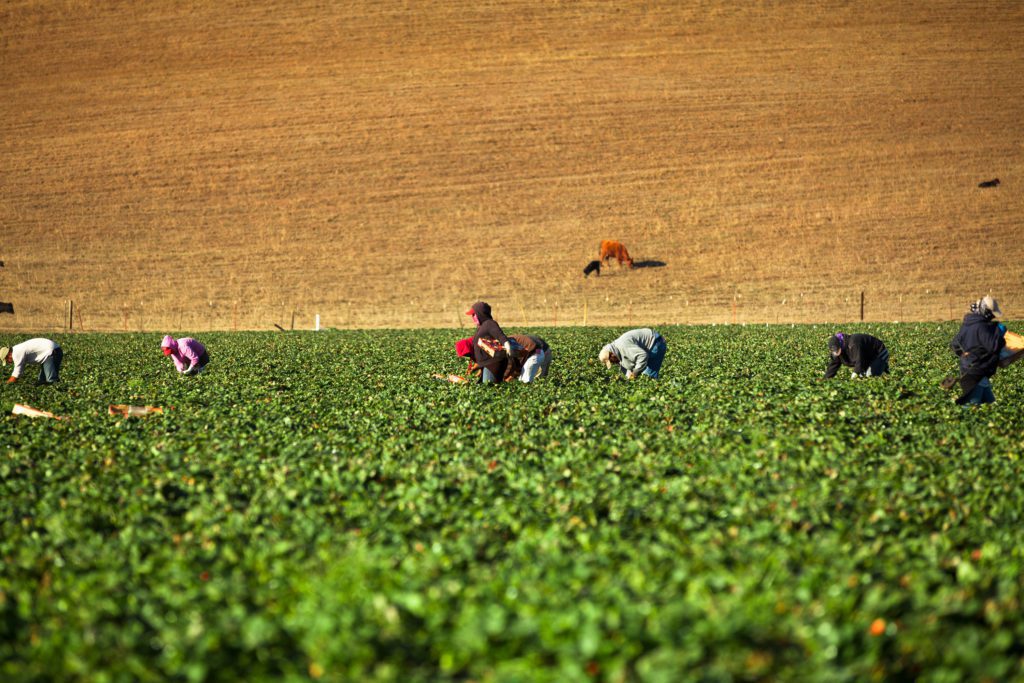 Most of the lettuce consumed in the United States grows about 100 miles south of the Bay Area. But the chemicals sprayed on these fields can take a toll, particularly on children. For nearly two decades, Professor Brenda Eskenazi and her fellow researchers have been asking and answering: What are the effects of pesticides on the people who live and work near the agricultural fields of America’s Salad Bowl?

One study, for example, says that children exposed to sulfur are more likely to have asthma and other breathing problems.

Other studies connect a mother’s exposure to organophosphates—common insecticides used in homes and fields—with developmental disorders and hyperactivity in children. One investigation found that seven-year-old children born to mothers who live within a kilometer of fields treated with organophosphate pesticides have lower-than-expected IQs—a two IQ-point loss for every 522 pounds of applied pesticides.

More than 150 peer-reviewed publications have emerged from the Center for Environmental Research and Children’s Health (CERCH) project called CHAMACOS. The researchers share their findings and information with people who can improve public health and effect change. These stakeholders include the farmworker families in the Salinas area, as well as lawmakers and policymakers at the local, state and national levels. Turning research into action is the ultimate goal of CERCH.

In Mexican Spanish, chamacos is an endearing term for children. The Center for the Health Assessment of Mothers and Children of Salinas (CHAMACOS) study is the brainchild of Professor Brenda Eskenazi, who divides her time between the Bay Area and the Salad Bowl. “I don’t know what ever got me to think I could do a study like this,” she says.

By the late 1990s, Eskanazi had spent decades studying reproductive epidemiology and the effects of chemicals on children’s health. She recognized that, given her location in California, she was surrounded by a vital but overlooked source of exposure—the effects of which hadn’t been analyzed.

“I knew it had to be about agriculture,” says Eskenazi, who also directs CERCH. “We’re the agriculture state. At the time, there wasn’t much research being done.”

The longitudinal CHAMACOS study focuses on the effects of pesticides and other environmental exposures during pregnancy and childhood. Now the study’s young participants—most of whom were enrolled before they were born—are on the cusp of adulthood.

I feel like in some ways that I have 600 children. I would love it if we could follow-up on the children’s children—the study’s grandchildren.

From the beginning, Eskenazi knew she had to involve the families she wanted to study, not only as participants but as partners. Over the years, she and her collaborators have built meaningful and productive relationships with the farmworker families.

“It’s important to us to know what the community concerns are, so they can help us with what direction we should be going in our research,” says Professor Kim Harley, associate director of CERCH. These relationships make it possible to connect exposures to health risks and to communicate these findings to the at-risk population.

Community members work with CERCH researchers and are trained to collect data and biological samples. It’s an example of community-based participatory research, which means scientists and subjects work as equal partners.

“We really have been able to build a connection with the farmworker community and with the community in general,” says Harley. “What we’re learning about early life environmental exposures has applications to all of us.”

Giving back to the community is an important part of the CHAMACOS project. This program has educated more than 50,000 people in the community about pesticides and how to protect themselves against unnecessary exposure—even through small changes. “We learned in the study that if people keep their shoes outside and wipe their feet before they enter, there are lower levels of pesticide inside,” says Eskenazi.

Giving back also includes contributing to the education of the children themselves. More than 500 have participated in the study since birth, and an additional 300 have been enrolled since they were nine years old. Now some have children of their own, others are writing college essays and some have even become co-researchers.

“We work with them to develop neat research studies that they design and do the data collection for,” says Harley. In a study called HERMOSA, for example, teenage researchers analyzed the effects of exposure to endocrine disruptors often used in cosmetics and designed interventions to reduce exposure. (Hermosa means beautiful in Spanish.) In another offshoot study, teenage researchers have been studying pesticide exposure among their peers in the community not currently enrolled in CHAMACOS.

The study’s leaders also want to affect change in policy and put safeguards in place to protect the people of Salinas. In March 2017, Professor Asa Bradman, associate director of CHERCH, presented findings from a CHAMACOS paper to the California State Senate. In January 2018, the state implemented regulations that require schools near fields be notified before the application of pesticides and that prohibit the use of certain pesticides near schools at specified times.

The hundreds of papers and additional studies using CHAMACOS data show its potential to help inform research in a variety of areas, including air pollution exposure, genetics and even dentistry.

Harley and other CERCH researchers have also studied exposures to chemicals like Bisphenol-A (BPA) and those found in flame retardants. “Our flame retardants research played a role in changing the flammability standards of the state of California with respect to the chemicals in foam,” she says.

“If I have to credit myself with anything, it’s that I love the interdisciplinary nature of this thing,” says Eskenazi, who originally trained as a neuropsychologist. “The study is very transdisciplinary.”

CERCH’s success has caught international attention. “We have shared our study protocols widely with people across the world,” says Eskenazi. In one day, for example, she hosted collaborators from Chile, Brazil and France. She also advises on birth cohort studies that look at environmental exposures around the world. “I think we’ve helped move the field forward,” she says. “We have a model of what can be done.”

According to Eskenazi, the end is not yet in sight. CHAMACOS can continue gathering findings long into the future. For example, the study has produced a biorepository with about 350,000 samples. “People can use these data and biological samples for years to come,” says Eskenazi.

“I feel like in some ways that I have 600 children,” Eskenazi says. “I would love it if we could follow-up on the children’s children—the study’s grandchildren.”