Ten years ago, the mortality rate for black infants in the United States was 11.5 per 1,000 live births—more than double that of white infants. And common causes of death for black infants—low birth weight and Sudden Infant Death Syndrome—were two to four times higher than for white infants. That’s why researchers at Berkeley Public Health founded Best Babies Zone (BBZ) in 2012—a program dedicated to reducing racial inequities in infant mortality. 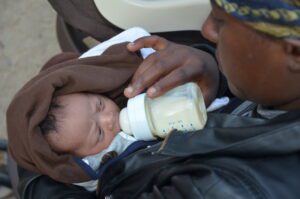 BBZ researchers have learned a lot about how the social determinants of health affect babies’ chances of survival over the past eight years, and detail their experience in a new paper published in the Maternal and Child Health Journal.

“The article articulates how our BBZ work advanced the importance of the social determinants narrative in the field,” said lead author and former BBZ postdoctoral fellow Becky Reno, currently a research and evaluation consultant with the UC Berkeley Maternal, Child and Adolescent Health Program and with the Athena Institute at Vrije University in Amsterdam. Economic and social conditions, known as social determinants, contribute to individual and group disparities in health status.

Co-authored with BBZ founder and Berkeley Public Health professor emerita Cheri Pies and her BBZ team members, the article investigates ways in which the organization’s mission of impacting birth outcomes was informed and guided by the life course perspective.

The paper describes the crucial need to center racial equity in discussions about maternal and infant health and to shift power to those most impacted by health and social inequities. “Some of the most challenging barriers that BBZ sites face relate to the mismatch between the current paradigm around what it will take to reduce racial inequities, and the rigidity and racism embedded in many of our structures and institutions,” the authors wrote.

BBZ “supported a national strategy to develop and fund long-term, sustained programs that prioritize measures of community well-being to improve the health of all across the life course,” said Reno. The life course perspective uses the strategic framework of place-based, community-driven, multi-sector work with contribution to broader social movements to address health disparities.

The BBZ initiative was initially conceived by Berkeley Public Health Dean Dr. Michael Lu in 2002, while he was Associate Director of the UCLA OB-GYN Residency Training Program. BBZ is based on the work he and Neal Halfon did as part of his first article on the life course, along with colleagues at the School. The program was then launched by Pies, a pioneer in the field of maternal and child health, with funding from the W.H. Kellogg Foundation.

The initiative began with three pilot geographic “zones” located in Oakland, New Orleans,and Cincinnati. By 2017, its reach grew to nine cities nationwide. Additional funding was provided by the Kellogg Foundation to create a Technical Assistance Center that was tasked with creating new zones and of providing further support in the field of maternal and child health, both within the zones and to external organizations.

“The BBZ Initiative helped to advance the conversation about the complex nature of health inequities in birth outcomes in the field of maternal and child health,” said Dr. Pies,

After seven years of being based at UC Berkeley, the initiative moved to CityMatCH at the University of Nebraska Medical Center in May 2019, after the retirement of Pies.

Read the full paper on PubMed.