Dr. Joyce Lashof – A Public Health Pioneer in the Midst of Sexism

This essay resulted from the Undergraduate Research Apprenticeship Program (URAP), and was undertaken as part of the 150 Years of Women at Berkeley History Project.

“She started off with a love for medicine.”1 In 1981, Dr. Joyce Lashof was appointed the first female Dean of a professional school in the United States at UC Berkeley’s School of Public Health. She already had an illustrious career: after graduating from Duke University in 1946, she attended the Woman’s Medical College of Pennsylvania (subsequently renamed Medical College of Pennsylvania). This achievement was especially notable because the first priority for admission to medical school was offered to men returning from World War II. After graduating from medical school, she entered a residency in internal medicine at Montefiore Hospital in New York. She completed this in 1953. Dr. Lashof was then appointed as a temporary assistant professor in the Department of Medicine and a consulting physician at the Student Health Services at the University of Chicago.2 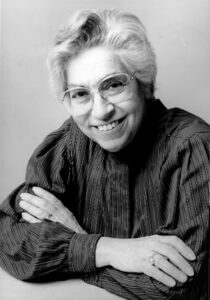 In 1960, Dr. Lashof had a taste of discrimination against women physicians when the chairman of the Department of Medicine expressed his reluctance to “grant a tenure-track position to a woman because he feared she would leave if her husband [an assistant professor of Mathematics at the University of Chicago] failed to make tenure or took another job somewhere else.”3 Given this toxic environment, when her lifelong mentor, Dr. Mark H. Lepper from the University of Illinois, offered her a position, she decided to take it. She joined the faculty of the Department of Preventive Medicine at the University of Illinois College of Medicine and led a research project funded by the U.S. Office of Economic Opportunity to study the health needs of poverty-stricken populations in Chicago. Through her research, she found that low-resourced and disadvantaged communities were subject to a disproportionately high rate of health problems compared to the rest of Chicago. This included, but was not limited to, a 60 percent higher infant mortality rate, and a 200 percent higher incidence of premature birth.4 To address these issues, she recommended the development of community health centers. Subsequently, Dr. Lashof served as the Director of the Mile Square Health Center, the nation’s second Office of Economic Opportunity-funded community health center. From 1967 to 1971, she directly tackled the public health issues encountered by this mostly Black and severely under-resourced neighborhood on Chicago’s West Side.5 Due to the important impact the community health centers had on underserved minority groups, Dr. Lashof became the Director of Community Medicine at Presbyterian-St. Luke’s Hospital. As the only female director at the hospital, she recalled being “the lone woman sitting around the table with all the men” during staff meetings, where she “could sense that in their eyes [she] was not quite an equal.”6 Despite this, her determination and passion for helping under-represented communities resulted in her appointment in 1973 as the first female Director of the State of Illinois Public Health Department, which was in fact “the first such position in the country to be held by a woman.”7

Dr. Lashof’s work as Public Health Director led to national recognition. In 1977, she was appointed the Deputy Assistant Secretary for Health at the Department of Health, Education, and Welfare in Washington, D.C.. While there, she faced another “roadblock due most likely to misogyny” when a man was appointed to a position over her that she felt she should have been promoted to fill.8

Nonetheless, Dr. Lashof remained persistent in serving the federal government as she transitioned from her position at the Department of Health, Education, and Welfare to her role as the Assistant Director of the Office of Technology Assessment in 1978. In that capacity, she led the Office’s food and health programs, in which she directed crucial cost-effective analyses of surgery for breast cancer, bone marrow transplant therapy, use of the artificial heart, and screening for colon cancer, among other procedures.9 Dr. Lashof also studied federal immunization policies, evaluated strategies for medical technology assessment, and explored the global management of healthcare technology in other countries.

Because of her interest in global health, she traveled to China in 1979 as a guest of the U.S.-China People’s Friendship Association. There, she visited Chinese hospitals and healthcare clinics that were undergoing modernization following the Cultural Revolution.10 Over the next four years, Dr. Lashof contributed greatly to the understanding of the intersection of health and technology. She became recognized as a leader in this field.

In 1981, Dr. Lashof became the first female dean of the School of Public Health at U.C. Berkeley; she was also one of the first physicians and non-academicians to become the dean of the School. Joyce’s daughter, Carol, stated that “[Joyce] wasn’t primarily a scholar, she was an activist.”11 This ultimately became one of the main reasons she was selected for the position. During her time as dean, her accomplishments continued as she toiled for international health. She was invited to speak at global health conferences like the “Health for all – 25 years of Cuban Ministry.”12 She strived to use science to bring communities together and change the face of public health. She also focused on providing opportunities for underserved communities like the creation of the summer program for Latinx students. According to the U.C. Berkeley Public Health Newsletter, during Dr. Lashof’s tenure as dean, the School retained its status as one of the top programs in the country.13

Dr. Lashof was well liked as a dean by her colleagues and students. Former colleague Judson King stated that “[Dr. Lashof] was a reasoned and effective dean” and that she “had the interests of her School strongly in mind.”14 In the U.C. Berkeley Public Health newsletter, Lashof stated that during her sabbatical leave she was also able to further explore the relationship between public health and primary health care.15 She achieved this by visiting developing public health schools in places like Australia and Indonesia, and helping them set the foundation of their programs. According to her colleagues, this gave her a unique perspective and made her truly different from other deans. Dr. Richard Scheffler, who is an Emeritus Professor in the Schools of Public Health and Public Policy, stated that “[Lashof] believed in the power of communities. And one of her things was community-oriented primary care; she believed in public health care from the community.”16 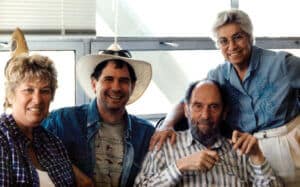 Joyce Lashof (right) with the founding editorial board for The Wellness Letter in University Hall in the early 1990s. (Photo courtesy of Dale Ogar)

Another innovation during her tenure as Dean was the creation in 1984 of the UC Berkeley Wellness Letter in collaboration with Sheldon Margen, a Professor of Public Health at UC Berkeley. The school’s purpose in co-publishing the Wellness Letter was to provide the public with a monthly newsletter about the science behind healthier lifestyles. In addition, it debunked theories and speculations on many public health topics, one of which was the misleading information being promoted about dietary supplements.17 The Wellness Letter was an immediate success, winning top ratings from the U.S. News & World Report, the Baltimore Sun, Money Magazine, the Washington Post, and Vogue for its “brisk and reasoned coverage of health issues.”18 It was recognized nationally as a health newsletter that addressed the latest research on what individuals can do to optimize health and prevent disease. The newsletter also had multiple international versions that were distributed to Canada, Australia, Brazil, Germany and other countries. By the early 1990s, there were nearly one million subscribers in the United States and Canada. Her contribution to articles across many public health topics was always “practical, insightful, down-to-earth, and optimistic,” according to her longtime friend and Managing Editor of the Wellness Letter Dale Ogar.19 Dr. Lashof was very proud when she stated that “the numbers of people being reached by the Wellness Letter has surpassed all our expectations.”20 In addition to offering readers recommendations on healthier lifestyles, it also directly benefited the school: in its first 15 years of publication, “it brought about 13 million dollars into the School of Public Health” which was ear-marked primarily for student support.21

Dr. Lashof has had a remarkable and pioneering career, made possible by her “moxie,” according to Dr. Scheffler.22 “She doesn’t just work hard behind the scenes; she goes out there and tangles with whatever needs to be tangled with,” her daughter Carol Lashof says.23 Dr. Lashof used the Wellness Letter to voice her opinions and spread her medical knowledge, and she was not afraid of stepping on anyone’s toes. From standing up to the tobacco and alcohol industry giants to taking on the rapidly growing supplement industry, she didn’t allow her gender or her position as Dean to limit her goal of creating a better society and better communities.24 Her determination allowed her to not only survive but to thrive in the predominantly male academic environment.

In addition, Dr. Lashof’s passion for public health extended far beyond her 10 years as Dean of the School of Public Health at UC Berkeley. In fact, following her deanship, she went on to become the president of the Association of Schools of Public Health in 1987 and the American Public Health Association in 1991. She also chaired the Presidential Advisory Committee on the Gulf War Veterans’ Illness between 1995-1997. From 1999-2001 she was appointed to the Institute of Medicine Committee on the Technologies for the Early Detection of Breast Cancer (using mammograms for screening).25 Her commitment to her community also remained strong after she retired. At ninety-one years of age in 2017, Dr Lashof was seen carrying a sign which read “End the Muslim ban now” at an Alameda rally in support of her Muslim neighbors.26 Even after a long, revolutionary, and rewarding career, Dr. Lashof remains humble. When asked how she feels about her groundbreaking role in establishing women in academics, Dr. Lashof simply replied, “If you break a barrier, it just makes it easier for the next person to break a barrier.”27