The UC Berkeley School of Public Health is delighted to announce the appointment of Jyothi N. Marbin, MD, as director of the UC Berkeley-UCSF Joint Medical Program (JMP). She will begin her term on March 1, 2021. 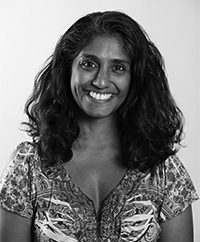 Dr. Marbin comes to the JMP from the UCSF Department of Pediatrics, where she served as the associate program director (APD) for Recruitment and Diversity, Equity, and Inclusion (DEI) for the Pediatrics Residency Program; the director of the Pediatric Leaders Advancing Health Equity (PLUS) Residency Program; and co-director of the Health Equity & Racial Justice Graduate Medical Education Pathway. Dr. Marbin is an associate clinical professor and general pediatrician who practices at Zuckerberg San Francisco General Hospital (ZSFG). Earlier, Dr. Marbin worked at Benioff Children’s Hospital Oakland (BCHO).

Dr. Marbin became director of the PLUS program in 2015, and subsequently revised its vision, mission, and goals and developed a framework to evaluate community projects. She developed and taught a health equity leadership curriculum to PLUS residents and created a partnership with BCHO that allowed BCHO residents to participate in the PLUS program.

At UCSF, Dr. Marbin has been very active in DEI and anti-racism work. In 2019, she was named the first APD for DEI for the Pediatrics Residency Program. She also founded and co-directed the Health Equity & Racial Justice GME Pathway, which engaged nearly 80 learners during its inaugural year in 2019. She was a co-leader of the Department of Pediatrics’ Anti-Racism Task Force and has developed and led a variety of trainings in DEI and leadership for faculty and residents. She also helped create a racial affinity group program for UCSF fellows and residents. She founded the Pediatric DEI Catalyst Program, which supports pediatric faculty who seek to create space for conversations around racism and bias in the clinical environment.

Dr. Marbin is a highly sought after speaker and has given many local, regional, and national talks on racism in medicine, social justice, and medical education. She has been a member of the UCSF Academy of Medical Educators since 2018.

Dr. Marbin completed her undergraduate work at Brown University. Prior to starting medical school, she worked with City Year Rhode Island for five years, where she eventually assumed the role of executive director. Dr. Marbin received her medical degree from the Warren Alpert School of Medicine at Brown and completed her pediatric residency training in the PLUS program at UCSF. She completed the UCSF Teaching Scholars Program in 2017, and received a post-baccalaureate certificate in ethnic studies from San Francisco State University in 2020.

Dr. Marbin lives in Alameda with her husband and two school-aged children; she also has a young adult foster son who lives in Oakland. She regularly volunteers with a number of community organizations, including the Butterfly Effect: Migration Is Beautiful youth advocacy project and the Alameda Food Bank.

BPH thanks the search committee co-chairs and members for their service. We wish Dr. Marbin a warm welcome to the JMP and UC Berkeley School of Public Health!