Professor Fenyong Liu: Love and support of others led to my success 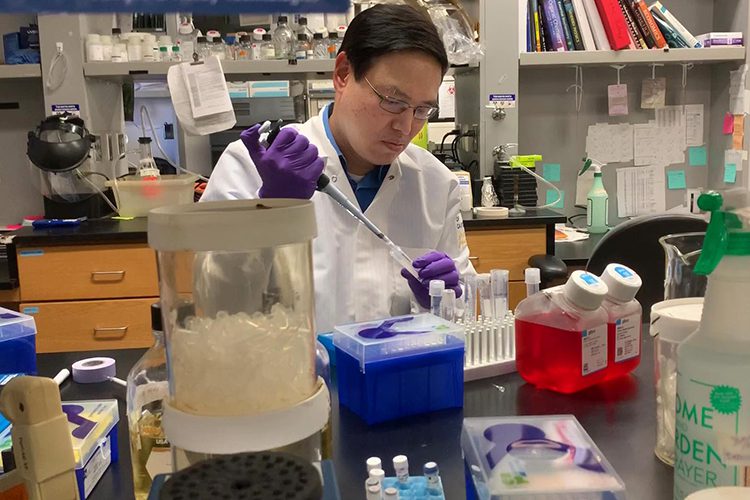 Fenyong Liu is a professor in UC Berkeley’s School of Public Health. His thesis research led to the discovery of the herpes simplex virus protease. Now, he’s working on human herpesvirus 5: cytomegalovirus, figuring out how to treat and prevent virus infection.Photo: courtesy of Fenyong Liu

“I was born in a city called Canton. Nowadays, it has another name: Guangzhou. It’s a city in the south of China near the coastline, near Hong Kong. I was born two years before the Chinese Cultural Revolution of 1966.

When I was growing up, I had a very happy and free childhood. I started school when I was 7. In school, I learned Chinese literature and mathematics. Even though there was no academic pressure, my father made sure that I studied hard every day.

My father was born in the 1930s in northern China. When the Japanese invaded and occupied China from 1937 to 1945, my father was moved from one place to another with his parents. He didn’t even finish elementary school because World War II went so long. So, because of that, he really wanted his children to have the best educational opportunities.

My father never let me do anything other than study. He said, ‘I will cook and clean. You have to study.’ So, that really motivated me. My mother was a school teacher, so she taught me math. They always thought that having a skill and making a contribution to society was the most important thing.

I still remember when Mao Zedong died in 1976. I was 12 years old. The whole country went into mourning. Then, Deng Xiaoping became the Chinese leader and opened China to the world. I was exposed to scientific journals and magazines from the West. In school, we began to learn about scientists, like Albert Einstein and Marie Curie, as well as Chinese American scientists who had won Nobel Prizes. I found so much inspiration in learning about the history of modern science — the discovery of the genetic code. It was a tremendously exciting time because there was a whole new world out there. 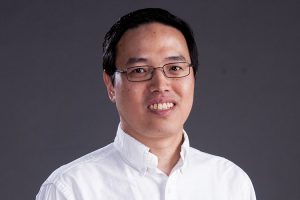 Liu, who first came to Berkeley in 1995, is now working to figure out out how to treat and prevent human herpesvirus 5: cytomegalovirus.Photo: UC Berkeley

In 1981, I took the national college entrance exam. It was a dayslong exam — seven topics within one week: Chinese literature, math, biology, chemistry, physics, English and political science. Every high school student, if they wanted to go to college, had to do well on all seven topics.

I went to the University of Science and Technology of China. I spent the first two years in the Department of Modern Physics and then three years in the Department of Biology, completing my undergraduate studies in 1986. My time in college was one of my happiest moments. This was the time that I was exposed to the whole academic world, and I was hungry for knowledge and enjoyed reading many books from various disciplines and fields. During that time, I discovered my lifetime academic interest and subject: biology. I got to know many of my lifetime friends. Finally, I found my lifetime partner, my wife, in college.

After college, I decided that I wanted to go to graduate school in the U.S. There were only two testing sites in China — one in Beijing and one in Shanghai — and the registration fee was only about $20, but that was a tremendous amount for my family. Luckily, I got a full scholarship to come to the U.S. I attended Chicago Medical School for one year, then enrolled in a Ph.D. program in the Department of Biochemistry and Molecular Biology at the University of Chicago.

At the time, I was very interested in viruses, like HIV and influenza, because they were among the leading causes of death in our society. My Ph.D. mentor, Bernard Roizman, was so supportive. He is known to be an outstanding mentor and a brilliant scientist and has trained more than 100 leading scientists working on the herpes virus.

When I struggled in my coursework and my research, Bernard was always there to help. Using his own story as an immigrant from Europe coming to study as a young student in the U.S., he told me that I would make it, just like him. After initially struggling without success with several projects, I completed my thesis research that led to the discovery of the herpes simplex virus protease. I’m so grateful to Bernard, because he spent so much time with me. He had a hands-on style — I talked to him every week when he was in town.

After I completed my Ph.D. studies in 1992, I became a postdoctoral fellow at Yale University, where my wife was a Ph.D. student. My postdoctoral mentor, Sidney Altman, is a Nobel laureate specializing in RNA biochemistry. In his lab, I developed new RNA-based methods and tools for treating viral diseases. Sid was a great mentor and always generous to his trainees. I still remember that, during my job hunting, Sid read and corrected my job resumé and personal statements, listened to me when I practiced my job talks, shared his grant applications with me, and revised and commented on my first NIH grant application.

I came to Berkeley in 1995. As a professor in the School of Public Health in the Division of Infectious Diseases and Vaccinology, I study herpes viruses. So far, there are eight herpes viruses that infect humans. I’m working on human herpesvirus 5: cytomegalovirus. What I want to do is figure out how to treat and prevent virus infection.

Right now, my colleagues and I also have several exciting projects related to the COVID-19 pandemic: In collaboration with the College of Engineering and the private sector, we’re looking for new ways to decontaminate personal protective equipment using carbon dioxide. In another project, we’re working with a compound that has strong antiviral properties against the disease. I think that when we have the opportunity to make a contribution to society right away, we should just do that.

I really feel that I’m just an average person. Luckily, my parents’ love and sacrifice motivated me to pursue my dream, and my mentors’ examples as scientists and educators inspired me to develop my scientific career. I’ve had a lot of struggles, and have overcome many obstacles, and I believe that I am where I am today because of all of the love and support I have been given throughout my life.”