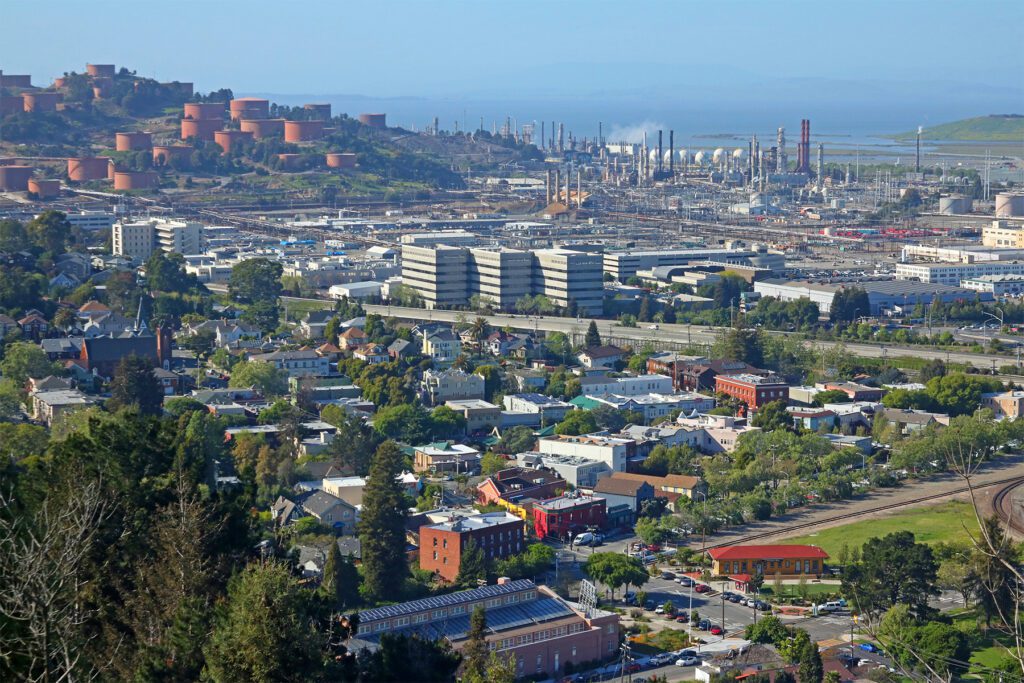 For decades, Black residents in the city of Richmond, California, about eight miles north of Berkeley, have faced disproportionate rates of neighborhood air and noise pollution. While preliminary studies have shown that air pollution heightens coronavirus risk and severity, the pandemic has also made clear the stark contrast in rates of hospitalizations and morbidity between people of color and their white counterparts.

But youth in Richmond are doing something about the quality of their air.

Researchers from the UC Berkeley School of Public Health collaborated with Richmond’s RYSE Center from 2017-18 to measure air pollution inequality and work toward air quality justice. The researchers published a paper on their work in the January 2021 issue of the International Journal of Environmental Research and Public Health.

“The bigger picture is that sometimes what goes unseen, such as air pollution in historically marginalized communities, can be a significant driver of structural racism, health disparities, and a loss of life opportunities,” said James Earl Schier Nolan, MPH ’16, who worked on the study. “These harms often occur without any specific individual actors or as unintended consequences of larger systems.”

According to Kim Harley, a Maternal, Child, and Adolescent Health professor at the School of Public Health, who also worked on the study, some of the youth involved in the study have gone on to study environmental science in college and are currently working with local high schoolers to address air quality issues.

“Our research engaged local high school students in Richmond to help design, conduct, and interpret the study…. So findings of poorer air quality were actually conducted by youth who are concerned about environmental health and justice in their community,” Harley said. “This project shows how youth participatory action research can elevate the voices and concerns of young people in a community while also empowering them with skills to conduct research, present data, and become agents of change.”

Among their findings, the youth researchers noticed that green space was associated with lower levels of nitrogen dioxide, while railroads and major roadways were associated with higher levels. Researchers hope to take these findings to the Bay Area Air Quality Management District, California Air Resources Board, and the city of Richmond to advocate for change.

“The overarching main message is that structural racism and environmental justice more broadly should be among the central considerations that guide policy and business decisions, locally, nationally and internationally,” Nolan said. “Beyond that, specific decisions made should actively and meaningfully include voices of those most impacted by said harms.”

“It was exciting to see an opportunity to influence my community in relation to the everyday inequities that I considered normal and this project immediately struck me as something I wanted to be a part of,” said Bailey Ward, one of the youth researchers, now an undergraduate studying geography and environmental studies at UCLA. “This project was conducted with community voice at its core, which created efficiency in approaches to our research and eventually supported the delivery of culturally sensitive dissemination of results.”

Ward’s experience at the RYSE youth justice center made her passionate about addressing health disparities and improving the environmental health of her community and others.

At the RYSE Center, core values like justice, equity, liberation, and systems change have empowered youth of color to combat the negative narratives that they often hear about themselves.

Yahna Williamson, an undergraduate studying environmental studies at San Francisco State University and student research assistant at the School of Public Health, said that her time as a youth researcher for this study increased her environmental health literacy and motivated her to use the knowledge to improve her community.

“Many residents in Richmond don’t even realize the extent of how harmful the air quality can be to their health,” Williamson said. “It was powerful to be able to lead the research conducted in my own city, on issues that affected me and my peers. This project is a great illustration of  how valuable the voices of individuals within underserved communities are and how pivotal they can be when they are afforded opportunities to be heard.”

This study results highlighted the importance of public health knowledge within a community affected by environmental racism.

“As it is clear that COVID-19 disproportionately impacts low income and communities of color, and that air pollution disproportionately impacts these same groups. Combined, COVID-19 and air pollution may be significant contributors to health disparities broadly, and to structural racism specifically,” Nolan said. “Thus, the need to improve air quality, especially in low income and communities of color, is imperative.”

Read more on the International Journal of Environmental Research and Public Health.