The amount of air pollution in a community depends greatly on its proximity to emission sources, such as automobiles, factories and power plants. Now, a group of researchers — led by Joshua Apte, UC Berkeley assistant professor in the Department of Civil and Environmental Engineering and in the School of Public Health — has shown that levels of air pollution vary not only by region, such as between urban and rural areas, but by city block.

Their results, published this week in the Proceedings of the National Academy of Sciences (PNAS), expanded on the authors’ previous research by detailing the racial and ethnic disparities in air pollution, which showed that areas with high levels of air pollution tend to be populated by people of color.

“We don’t all breathe the same air,” said Apte. “Most importantly, for almost all air pollutants in the U.S., it’s already understood that people of color breathe air that’s, on average, more polluted. And that mostly doesn’t come from income, it comes from a variety of different historic drivers of inequality.”

Unlike other air quality studies, where only a few measurements were taken per city, the researchers used Google Street View cars equipped with air monitoring devices operated by Aclima to continuously measure air pollutants street by street. As the cars drove around, the monitoring devices took measurements every second, translating to a measurement about every 10 meters. The researchers also chose to measure four pollutants that are known to cause health problems but aren’t as frequently studied or as well understood as others. 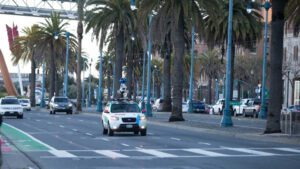 Over 32 months, the cars covered every street of 13 cities, towns and urban districts in four counties in the San Francisco Bay Area. This allowed them to pick up fine-scale variation in air quality at a hyperlocal level and create highly detailed maps of these differences.

The researchers found that most variation occurs at the hyperlocal level — from one city block to the next — due to the presence of a pollution source. In their findings, they also shed more light on how the variation in air pollution corresponds with segregated communities in these urban areas, finding that white populations have 9–14% less exposure to these pollutants than the population average, while Black and Hispanic populations have 8–30% higher exposure than the average.

“Even as air quality in the U.S. is dramatically cleaner than it was 50 years ago when the Clean Air Act was written, one thing has remained true: although we’ve made this incredible progress with cleaner air, there is a big racial and ethnic disparity in air pollution that still exists,” said Apte.

As an example, their study found that West Oakland, which has a high percentage of Black residents, has an elevated concentration of pollutants. This neighborhood is surrounded by highways and has a railyard, shipping port and factories located near homes and schools.

“What makes West Oakland an overly burdened neighborhood is not that it just has one major pollution source that makes it more exposed, but that it’s too much of everything,” said Apte.

Apte and his colleagues have worked closely with a local environmental justice organization, the West Oakland Environmental Indicators Project (WOEIP), to develop strategies to overcome these environmental burdens.

“The closest thing that we have as evidence is the research that he has developed,” said Margaret Gordon, co-director of WOEIP.

Apte has previously published hyperlocal air pollution maps from West Oakland that show a relationship between concentrations of pollutants and adverse health outcomes, such as elevated rates of death among seniors and rates of preeclampsia among pregnant women. With this information, the WOEIP identified hotspots to apply mitigation efforts such as indoor air filtration and green infrastructure.

The success of the researchers’ methods and the value found in their data has encouraged Google and Aclima, the companies who contributed to this study, to expand this effort to other cities. Senator Edward Markey of Massachusetts has also introduced legislation that would deploy hyperlocal air quality monitoring systems to communities in need.

According to Apte, expanding this type of hyperlocal mobile air pollution monitoring would be affordable compared to the high costs of traditional fixed measurements. He hopes this will soon become a reality, allowing researchers to monitor these locations for longer periods of time and evaluate how air pollution mitigation efforts play out several years down the road.

“Repeating these kinds of measurements periodically is going to be powerful for understanding whether these policies are really moving the environmental justice for air pollution,” said Apte.

This article was originally published on the Berkeley Engineering website.