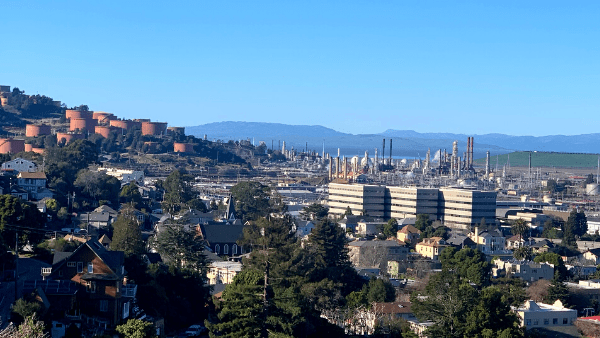 Historic patterns of housing discrimination dating from the 1930s still drive air pollution disparities in hundreds of American cities today, according to a major new study from a team of researchers at UC Berkeley and the University of Washington.

Despite dramatic improvements in air quality over the past 50 years, people of color at every income level in the United States are exposed to higher-than-average levels of air pollution. While this disparity has been widely studied, the linkages between today’s air pollution disparities and historic patterns of racially segregated planning are still being uncovered.

“Redlining,” a widespread federally-backed discriminatory mortgage appraisal practice dating to the 1930s, was the process of color-coding areas red if they included high concentrations of Black, Asian, immigrant, or working-class residents, deeming these areas hazardous and excessively risky for investment. This designation blocked access to favorable lending and other services. Historically redlined areas have been cumulatively affected by a low prevalence of home ownership, uneven economic development, displacement of residents, community disintegration, and lack of access to education and economic opportunities.

In a major new study of hundreds of U.S. cities, the UC Berkeley and University of Washington team found a strong correlation between present-day air pollution levels and historical patterns of redlining. Their paper will be published on Wednesday March 8 in Environmental Science & Technology Letters.

The researchers focused on 202 cities around the U.S., and looked at year-2010 levels of two regulated air pollutants — nitrogen dioxide (NO2; a short-lived gas emitted by traffic, industry and other sources), and fine particulate matter (PM2.5; longer-lived, tiny particles found in dust, soot, smoke and other emissions or formed in the atmosphere). The authors found that areas that were redlined in the 1930s consistently had higher levels of pollution today than those areas that received favorable treatment. Strikingly, air pollution disparities associated with historical redlining status in these cities were even larger than those associated with race and ethnicity.

Haley Lane, the lead author and PhD student in Civil and Environmental Engineering at UC Berkeley, said the study highlights the “distinct inequities that affect people in all neighborhoods, regardless of redlining grade.” She added that “it also emphasized the importance of identifying and improving conditions in those neighborhoods which have been systematically isolated from financial investment through practices like redlining while being subjected to increased environmental exposures for decades.”

The long-lasting implications of historical segregation on present day disparities are striking, according to the authors. “This study underscores how the past is still very much present when it comes to air pollution disparities,” said author Joshua Apte, assistant professor in the Department of Civil & Environmental Engineering and the School of Public Health at UC Berkeley.

“Redlining is a good predictor of air pollution disparities but it’s only one of the things that drive the racial and ethnic disparities in air pollution,” said Apte. “It’s not the only source of disparity that we need to be worried about.”

The study was the first to do a national-level analysis of modern urban air pollution and historical redlining.

“Racism from the 1930s, and racist actions by people who are no longer alive, are still influencing inequality in air pollution exposure today,” said Julian Marshall, a professor of Civil and Environmental Engineering at University of Washington and a co-author of the study. “The problems underlying environmental inequality by race are larger than any one city or political administration. We need solutions that match the scale of the problem.”

Rachel Morello-Frosch, a professor of Public Health and Environmental Science, Policy and Management  at UC Berkeley and co-author of the study, said the research goes “a long way toward highlighting the lasting consequences of structural racism on community health. These results can point the way toward targeted approaches for regulating emission sources and reducing exposures, as well as longer-term strategies to address discriminatory land-use decision-making that adversely impacts communities of color.”

This publication was developed as part of the Center for Air, Climate and Energy Solutions (CACES), which is funded by the U.S. Environmental Protection Agency (R835873). The views expressed in the study are those of the authors and do not necessarily reflect those of the Agency.

Coauthors of the study are Haley Lane, Joshua Apte, and Rachel Morello-Frosch of UC Berkeley and Julian Marshall of the University of Washington.