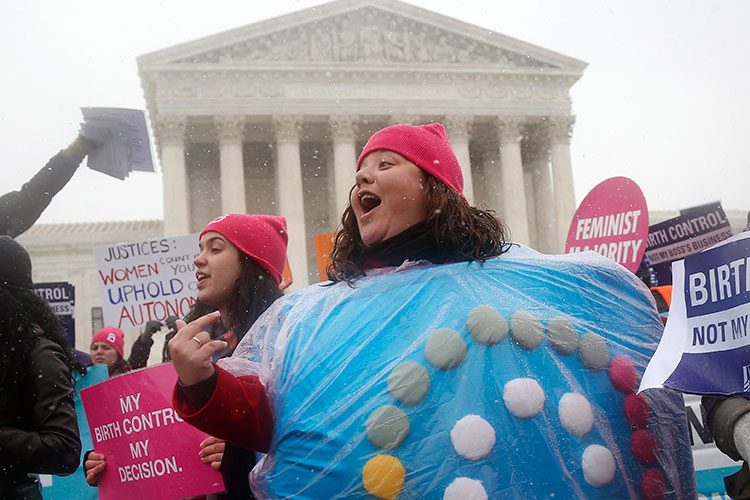 Women demonstrate in favor of expanded birth control access in front of the Supreme Court on a snowy day in March 2014. A new study of Google search data reveals that limiting access to contraception makes people more likely to search for abortion information online. (AP photo by Charles Dharapak)

This article originally appeared on the Berkeley News website.

Residents of states with limited access to contraceptives and high rates of unplanned pregnancies are more likely to turn to the internet for information about abortion. These are the findings of a new study of Google search data across all 50 states by researchers at the University of California, Berkeley.

The results suggest that policies that limit access to birth control — such as the Title X gag rule, which restricts federal funding from clinics that provide birth control if they also provide abortion information or referrals — lead people to seek out family planning information online.

“What is surprising is that the opinions that people have toward abortion might influence whether they search for abortion, but we found that these opinions don’t make a difference, once you control for health and legal factors,” said Sylvia Guendelman, a professor of maternal, child and adolescent health at UC Berkeley and co-principal investigator of the study. “What encourages or incentivizes people to search seems to be far more pragmatic than just ideological.”

The same results hold, regardless of statewide opinions toward abortion or legal restrictions on abortion access. In fact, some states with the most restricted access to abortion care and the most negative opinions toward abortion, such as Alabama, Louisiana and Mississippi, actually had the highest Google search volume for abortion, the study found. In 2019, these three states all attempted to pass legislation banning the procedure after the sixth week of pregnancy or banning it outright.

“It’s not that abortion restrictions don’t make any difference. People in highly restrictive states search for abortion more. However, when you control for other factors, namely access to contraceptives and the rates of unplanned pregnancies, we found the latter are far more important determinants of what people are searching for when it comes to abortion,” Guendelman said.

This study appeared online on Thursday, May 21, in the journal PLOS ONE.

Online search data can give researchers a unique glimpse into consumers’ concerns regarding contentious issues like abortion, Guendelman said, because stigma and lack of access to reproductive health care may prevent people from seeking the information more publicly. However, navigating the internet can be perilous, due to the amount of misinformation there on both birth control and abortion.

The study analyzed the relative search volume, or proportion, of all Google searches containing the words “abortion” or “abortion pill” in each state in 2018. The researchers then compared these numbers to state-level, reproduction-related policies and attitudes, including legal restrictions on and protections for abortion, availability of abortion facilities, health care costs, access and health outcomes, opinions about abortion, concern about birth control and prevalence of unplanned pregnancies.

Many states impose significant restrictions on people seeking to obtain an abortion, including mandatory waiting periods and counseling. In some areas, the number of clinics that provide abortions is also severely limited: A recent study found that people in 27 U.S. cities with populations greater than 50,000 had to travel more than 100 miles to reach a clinic.

While Google search volume for “abortion” was not predicted by state restrictions on abortion, the research team did find that people in states with fewer abortion facilities were more likely to search for the term “abortion pill.”

The abortion pill refers to medication that can be used to induce abortion. The higher search volume for “abortion pill” in states with a limited number of abortion facilities may imply that people who cannot access clinics are instead seeking out abortion information online, researchers said.

Restrictions and access barriers to contraceptives and abortion are particularly concerning during the COVID-19 pandemic, Guendelman said, as many people are now without work and struggling financially, child care centers and schools have shut down or gone remote, and many medical centers are limiting their in-person services. However, medication abortion provides an opportunity to make abortion services available through telemedicine, as the drug regimen is easy to follow for self-administration, said Ndola Prata, co-principal investigator of the study.

“Before COVID-19, women were being redirected and restricted in terms of the reproductive choices that they could make and, as a result of that, they had to go online to find the right resources and to understand their options,” Guendelman said. “Now, COVID-19 is impoverishing our population at a dramatic rate, and I think this is a time when the majority of women are looking for ways to plan their families in a way that is far more consistent with their values and their economic means than ever before. This is a time to ramp up the investment in prevention and good family planning.”

Co-authors of the paper include Elena Yon, Elizabeth Pleasants and Alan Hubbard of UC Berkeley. This study was partially funded by David and Lucille Packard Foundation.