A Q&A with John Balmes, MD 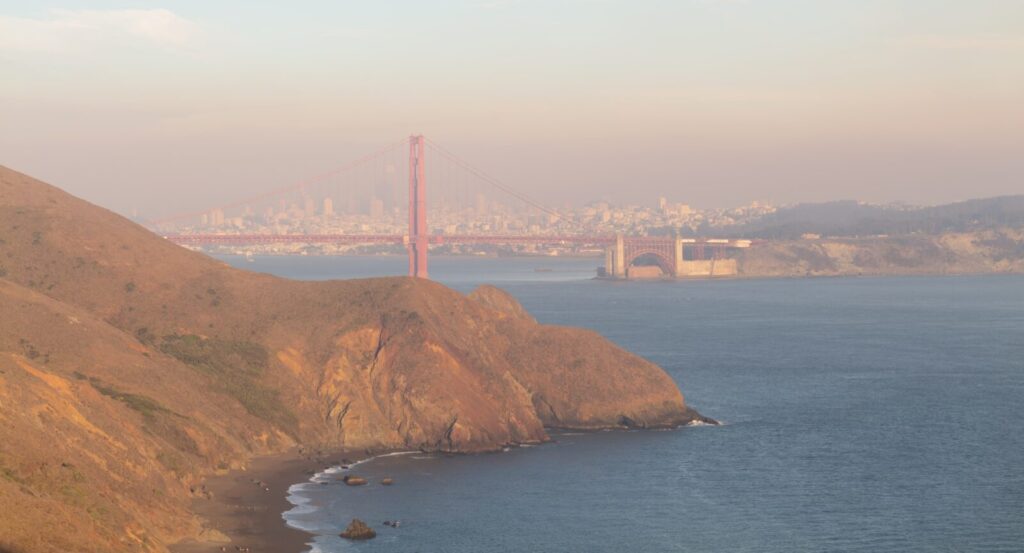 San Francisco is covered with smoke instead of fog, viewed from Bonita Lighthouse

California has faced another smoky fire season this year. From the Bobcat Fire in the Los Angeles region to fires burning near the border with Oregon and seemingly everywhere in between, the state has had to cope with extremely bad air quality. Especially worrisome are PM2.5 particles, particles and liquid droplets with diameters of 2.5 micrometers and smaller.

We reached out to pulmonologist and Berkeley Public Health professor John R. Balmes—who researches respiratory, cardiovascular and metabolic health effects of various air pollutants and occupational agents—to find out how to stay safe…and how to interpret the Air Quality Index.

First, how can we read the Air Quality Index (AQI) correctly?

The Air Quality Index [which measures five air pollutants, including particulate pollution like PM2.5 particles, and rates air quality on a scale from 0-500] gets updated every few hours. When it gets to yellow, which is 50 to 100, that is OK for most people. When the color gets orange that’s 101 to 150), people with preexisting heart and lung disease like asthma might experience symptoms and other susceptible subgroups, like pregnant women and older people, should stay indoors. When it gets to 151 to 200, that’s red and unhealthy for everyone and people should stay indoors as much as possible. When it gets to 201 to 300 and the color turns purple, it’s very unhealthy. It has gone purple in San Francisco and the East Bay during this latest wildfire season.

How should people without the internet access the AQI?

People do have access to AQI even if they don’t have the internet. Like homeless people without smartphones, you can actually call the Bay Area Air Quality Management District which is the local air quality management district for the nine counties around the Bay.

What symptoms may people experience when the air is bad?

The first symptoms in healthy people are likely to be irritation of the eyes, nose, and throat. When it’s purple, for people with asthma or chronic obstructive pulmonary disease, they will cough more than usual. They might have wheezing, chest tightness and shortness of breath.

Wildfire season in California will probably be longer in the future. Which group of people are considered particularly vulnerable to long-term smoke particulate (PM2.5) exposure?

When we have longer periods of wildfire smoke and bad air quality, we are worried about increased deaths in people above 55 with preexisting heart and lung disease.

But there is also a concern about pregnant women. It’s really the exposure of the fetus in terms of adverse birth outcomes. For example, there is some data about low birth weight associated with wildfire smoke in California from a Berkeley study.

But perhaps of most concern, though we don’t have data yet, is the effect on kids from prolonged bad air year after year. Is that going to affect their development? The one outcome that we already know a fair amount about in terms of exposure to PM2.5 is lung growth [for children].

We’re also concerned about increased risk for metabolic dysfunction, which could lead to diabetes and obesity.

What about people who work outdoors such as construction workers and farmworkers?

There’s a regulation that passed last year in anticipation of the wildfire season we experienced this year. When the AQI gets to 151, outdoor workers should be given the opportunity to wear N95 masks. It’s not a requirement but it is supposed to be available for the workers.

Will wearing a cloth mask protect people from smoke particulates?

The cloth masks don’t help at all. Cloth masks work to prevent expiratory droplets from being disseminated. But they don’t do anything to protect the wearer from fine particles. A surgical mask does provide some protection from wildfire smoke and reduces exposure by 20 to 30 percent. An N95 mask can get a 95 percent reduction of exposure if it’s properly fitted. Usually, even if it’s not properly fitted, you can get 70 to 80 percent reduction, which means it can bring down effective exposure from an AQI of red to orange or orange to yellow.