Video: Race and Public Health: A conversation with Professor Obasogie

Professors Osagie K. Obasogie and Darlene Francis are colleagues at the UC Berkeley School of Public Health, and while their backgrounds are quite different, they spend a lot of time in conversation.

He’s trained in sociology and law, focusing on the intersection of the two disciplines, with particular emphasis on policing, race and inequality, and bioethics. She’s a neuroscientist who explores how biological, psychological and social processes interact over a lifetime to influence health and vulnerability to disease, especially how social inequalities in health came to be. 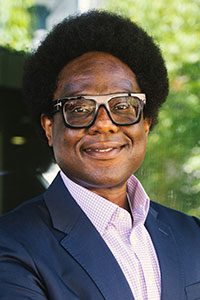 Recently, they decided to bring the type of discussion they usually have on the fly to a larger platform, via a Zoom chat organized by the public health school’s alumni association.

“I feel like we have all of these really interesting and fun conversations in the hallways, and this is a great opportunity to share the discussions that we have and extend these conversations with a new group,” said Obasogie, who’s also on the faculty at Berkeley Law.

Both talked about their journeys to the public health arena, and in particular how they came to focus their scholarship on issues of race and ethics — and how they shape the public health system, from big-dollar research down to the way doctors interact with patients. They stressed the need for educators to ensure the next generation of public health students are trained to ask deeper questions and challenge the status quo.

“When you ask the right questions, you get different answers,” Francis said. “So when we talk about diversifying the academy and really wanting input from many perspectives, it’s because we miss so much when we aren’t questioning or we aren’t asking or we aren’t represented.”

Obasogie discussed how his turn toward law started in college when he casually picked up a book on critical race theory in the bookstore at Yale University, where he earned his B.A. in sociology and political science.

“I was just really blown away,” he said. “I was studying race, but at that time I was not aware of  the work that was coming out of law schools. As an undergraduate, I thought law professors just taught you how to write a contract, or they taught you how to be a good litigator. I wasn’t aware of the rich theoretical work that was happening in law … For example, rather than seeing law as neutral, disinterested, and apolitical, critical race theory tries to understand how law constitutes  many of the social problems that we have in society, including issues around race and racism.”

He’d been considering law school, but this introduction sealed it. He went to Columbia Law, where a number of the founding critical race theory scholars were teaching. Obasogie felt the need to add social science training, particularly in the empirical realm, and earned his Ph.D. in sociology from Berkeley.

He taught at UC Hastings College of the Law before being recruited to the School of Public Health as part of its Joint Medical Program with UCSF in 2016. Obasogie is the Haas Distinguished Chair and leads the Diversity and Health Disparities Cluster as part of the university’s Othering and Belonging Institute. In 2021, he joined the Berkeley Law faculty and was also elected to the National Academy of Medicine; earlier this year, he won a prestigious Guggenheim Fellowship.

Now, Obasogie marshals all his tools to try and show how critical race theory has significant implications in the way scholars, clinicians, and policymakers think about medicine, public health, and even technology. 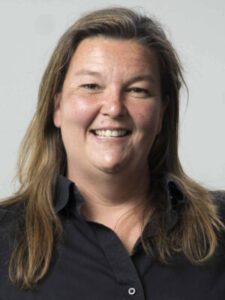 In the past couple of years, for example, he has published new research about “excited delirium,” a vague and controversial term often used by medical examiners and coroners to explain why community members die in police custody. His article examining how the condition is often tied to in-custody deaths was published in the Virginia Law Review last year.

Obasogie and Francis both acknowledged the challenges of inciting change, especially when “those folks who are vested in the paradigms have everything to lose, and not much to gain,” he said.

He offered a hypothetical: A researcher demonstrates that health outcomes presumed to be driven by genetics and other hereditary dynamics could be shown to just as easily be caused by environmental factors. Those results might spark anger, or complaints of political bias, when in fact it’s just challenging some of those accepted paradigms, he said.

“Once you start thinking about how certain adverse outcomes tend to be disproportionately present in certain populations and less so in others as less of a function of some type of inherent superiority or inferiority but more a function of the social and political forces  that have carried forth over years of inequality, that then raises different questions about knowing not just the cause of these disparities but what we should do about them,” Obasogie said.

“If we’re engaged in a society that tends to reward people because of what’s presumed to be their individual merits, and we now understand that these different outcomes are often not a function of anything about the individual but a continuation of the legacies of various social, political, and economic actions from hundreds of years ago, that raises questions about how we move forward and how we redistribute.”

A commitment to the future

Even talking about redistribution is bound to provoke anger in some circles, he noted. And that’s why the idealistic view of science — as a tool for finding the truth — is so elusive. The path to change runs through places like Berkeley’s law and public health schools, he said.

“How do we properly educate the next generation of public health practitioners, physicians, and other professionals to be aware of the  political side, while also recommitting themselves to the scientific method and to doing it in a way that is as pure as possible to benefit the greatest part  of our society?” Obasogie asked. “Rather than ignoring this conversation, or leaving it out of the curriculum, which happens too often in many aspects of public health education, we need to rethink what commitments we need to make to our students so that they’re aware of these dynamics, are up to date, and receive the best education possible.”

That includes teaching students about past mistakes by eminent researchers. One example is decades of eugenics laws and experiments in the United States, which continued into the 1970s. A few years ago, Obasogie and others at the public health school realized there were research dollars available through a school fund originally dedicated to the study of eugenics.

The school froze the fund in 2018 and is continuing efforts to use the money for anti-eugenics education, Obasogie said.

“But this is just another example of the legacy of eugenics after the end of World War II, and how that has embedded itself in many aspects of science, medicine, and public health,” he said. “That idea is still  common and persistent in many areas of our work, and we have  to make sure that we fully extinguish it  and try to reconstruct a field of public health and medicine that is truly all about equity.”

Berkeley can lead by example here, Obasogie said, and he’s eager to help alongside colleagues like Francis and through ongoing conversations, inside and outside academia.

“Just as you describe law, I thought science was neutral. I thought it was judgment-free. I thought it was right. I thought it was a matter of, you generate testable hypotheses, then you interpret data,” Francis said. “I really actually didn’t have an understanding of the social construct of the method I was using until I started reading more for myself.

“And that didn’t come from any pedagogy or coursework — that really came from self-interest and many conversations with you.”

This article was originally published on the Berkeley Law website.