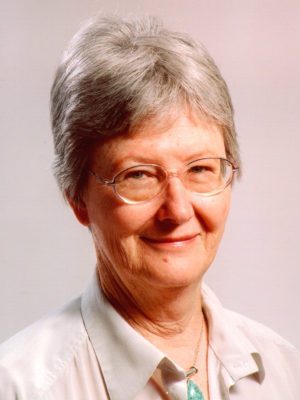 Gladys Block is a Professor Emerita and currently Senior Scientist at NutritionQuest, a company that provides diet and physical activity questionnaires and online behavior-change interventions. She previously worked at the National Cancer Institute as a nutritional epidemiologist.

Gladys Block is a Professor Emerita at UC Berkeley’s School of Public Health. Block received a Bachelor of Arts in English from Swarthmore College in 1960, and a Ph.D. in epidemiology from Johns Hopkins University’s School of Public Health in 1982. From 1982 to 1991, Block worked at the National Cancer Institute of the National Institutes of Health as a nutritional epidemiologist. While there, she developed the Block dietary questionnaire and conducted research on Vitamin C. At UC Berkeley she continued her research on vitamin C and its role in reducing oxidative stress and inflammation, as well as developing low-cost interventions to help people improve their eating habits. Her work on dietary assessment was taken over by her son, Torin Block, through NutritionQuest, where she is currently Senior Scientist.