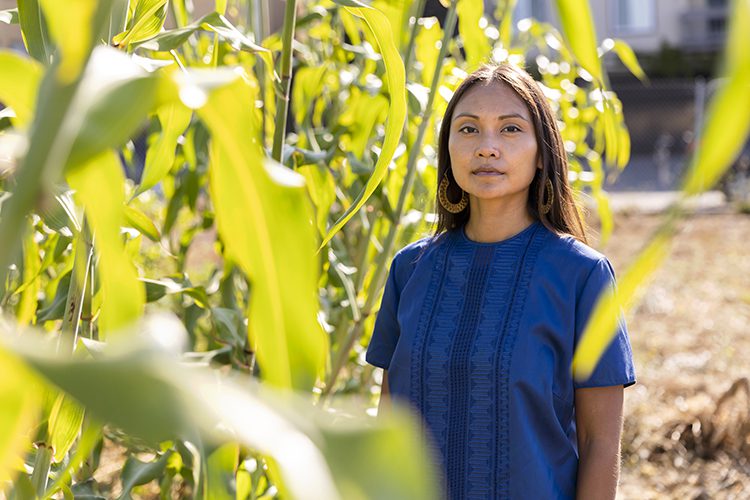 “My vision,” says Marlena Robbins, a doctoral student in public health and a member of the Giant Red Running Into Water People clan, “is access to psychedelics for Indigenous peoples.” (Photo by Brittany Hosea-Small)

Marlena Robbins’ maternal great-grandmother was a Navajo hand trembler, whose hand would shake as she held it over her patients to divine the source of their illness. Each diagnosis led to a specific and separate healing ceremony.

Before meeting a patient, “she prepared herself with certain songs and prayers and used fire, water and sacred medicine bundles,” said Robbins, a UC Berkeley first-year doctoral student in public health and a member of the Giant Red Running Into Water People clan. “Then, she would go into her own, looking into various realms of the patient to see what was going on in their physical or spiritual selves that was causing them pain.”

Robbins said she believes the gift of healing is handed down through the generations. One of her aunts, she said, “was gifted with the ability to see, to heal, but she didn’t want it. I like to think I’ve been offered the gift, and out of humility, I’d like to accept.”

Vital to receiving the gift, said Robbins, is continuing to learn the Navajo language, as “it will unlock a whole world of perception that English just can’t relay.”

So is getting a doctorate in public health, she added, and gaining expertise as an Indigenous Research Student Fellow at Berkeley’s Center for the Science of Psychedelics. The two-year-old academic center at the Helen Wills Neuroscience Institute conducts culturally-informed psychedelic research; offers a certificate program for advanced professionals — such as doctors, chaplains and therapists — to become psychedelic facilitators, or guides; and educates policy makers, journalists, potential patients and others about psychedelics.

“One of the center’s goals is to allocate resources toward Indigenous reciprocity efforts, as well as research, training and public education around the Indigenous uses of medicinal plants,” said Tina Trujillo, faculty director at the center and Robbins’ research adviser. “We designed the fellowship program for students interested in researching these and other related questions. It’s very important to access the voices that have been excluded from these conversations, as they’ve primarily been elite conversations. It’s also important to ask the questions that have not been conventionally asked in scientific spaces.”

Robbins, motivated by personal experience, is interested in researching Native peoples’ historic use of medicinal plants and in helping Indigenous people, like those on the reservation where she was raised in Window Rock, Arizona, capital of the Navajo Nation. Today, “only affluent people can afford psilocybin-assisted therapy and microdosing,” she said.

Among the psychedelics long used for their spiritual, mystical and medicinal powers are certain cacti, plants and fungi. Psilocybin is a naturally occurring chemical compound found in more than 100 mushroom species. For millennia, Indigenous communities have used these medicinal mushrooms in celebrations, healing rituals and religious ceremonies. Studies in the U.S. now suggest that, combined with therapy, psilocybin can alleviate anxiety and depression in cancer patients, substance abuse disorders and post-traumatic stress disorder.

Like most well-known psychedelics, psilocybin is illegal in the majority of jurisdictions around the world, but it’s emphasized in the center’s curriculum, said Trujillo, as “it is an area ripe for potential authorization to use it as a federally-approved treatment.” The center also has FDA approval for low-dose psilocybin functional MRI experiments to determine how psychedelic drugs affect the brain during the psychedelic experience.

Robbins plans to use her fellowship, in part, to interview multiple generations of Indigenous people about psilocybin mushrooms. “Some families have a very strong connection to plant wisdom,” she said, “and some may have lost a lot of that connection through a break in knowledge” caused by trauma to their Indigenous identity, such as forced assimilation in the late 19th and early 20th centuries in federal Indian boarding schools.

“I experienced trauma as a child within my own family and friends growing up on a reservation,” she said. “Having overcome my own addiction, and knowing how powerful that can be, I know there are people back home who need something they’re not getting through anti-depressants.

“I want to be able to say, ‘This is a very accessible option for you, and it helped me in my life, it helped me transcend my trauma, and I want to walk with you through it so you can be the best version of yourself.” 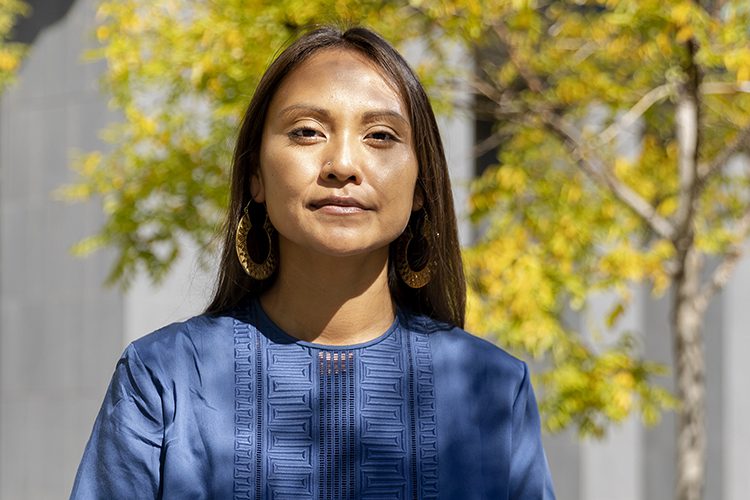 “I experienced trauma as a child within my own family and friends growing up on a reservation,” says Robbins. “Having overcome my own addiction, and knowing how powerful that can be, I know there are people back home who need something they’re not getting through anti-depressants.” (Photo by Brittany Hosea-Small)

Until she was age 11, Robbins lived in Window Rock, which today has a population of about 2,700 people, nearly all of them Diné, or “the people,” in Navajo. She recalled it as a “beautiful place to grow,” where she climbed trees, rode her bike, and appreciated nature and the love of Native traditions in her community.

She especially cherished her maternal grandfather. “He was a very big influence in our lives, in terms of love — he showed us what love was and meant by spending time with us, telling us stories, and being present as a strong male role model,” said Robbins.

But Robbins’ young life had challenges, too. Her parents divorced when she was 4. Her father, a former Marine, struggled with PTSD and alcoholism; her mother worked three jobs to raise her three daughters alone.

Before Robbins was born, her sisters, seven and nine years older than she, witnessed violence in their home. Robbins experienced “remnants of that unhealed violence” as she moved into young adulthood.

“There was a lot of rebellion and resentment,” she said. “Nothing was resolved or healed, and I was left to figure it out on my own.”

Like her sisters, Robbins experimented with alcohol in her early 20s. “We were blinded by it,” she said. “We didn’t know our limits or how to reflect on our usage of it.”

Robbins considered joining the military, the career path of her father, grandfather and uncles, or becoming a police officer or working in the criminal justice system, primarily to have a stable career. She chose to pursue a B.A. in criminal justice and criminology, which she received — after becoming a new mom and transferring from the University of New Mexico to Arizona State University — in 2010.

But a sorority sister’s family wound up having a bigger and more profound influence on Robbins.

“They were Xicano and also part of the Ajchemen tribe,” she said. “They were artists, culturally advanced, they traveled. They were mask-makers, musicians, muralists, and they exposed me to a lot of diversity and culture and influenced the way I viewed the world.”

Robbins began painting, and “it turned into my own medicine, my own therapy,” she said. “I’d been surrounded by art all my life — family members, an uncle, lots of friends who sold their jewelry, paintings and pottery at the Santa Fe Indian Market. But I never saw it in myself.”

She also discovered sobriety and a healthy diet. “I wanted to start taking care of my body and began eating lots of fresh fruits and vegetables, quinoa, corn, beans and squash,” she said. “My grandparents had been in the boarding school system, and what they ate had been based on a military diet ­— carbs and meat, to keep their calorie intake up — but there was not much nutritional value.”

Robbins began researching art therapy techniques and ran an expressive arts program at a nonprofit that offered transitional housing and substance abuse treatment. She was also working as a grant writer and assistant director of Cultural Coalition, a nonprofit dedicated to the promotion of Indigenous artists.

In 2016, she began a master’s degree program at Arizona State in American Indian studies, with a concentration on Indigenous rights and social justice. A course on intergenerational trauma led her to reflect on her own family. 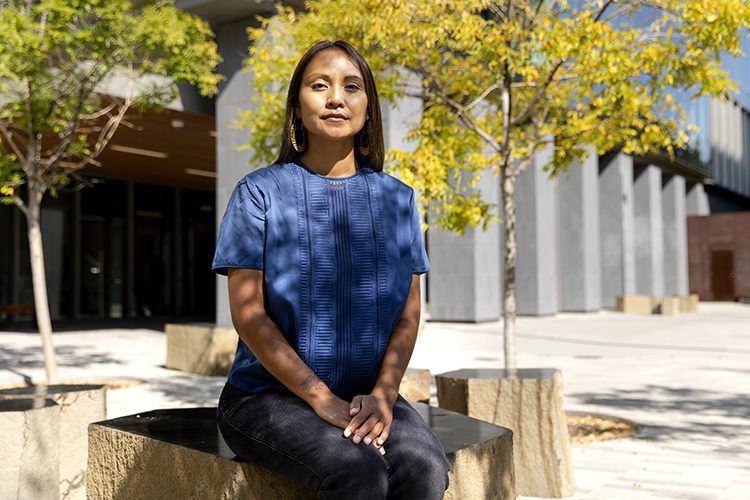 Robbins’ road to truly healing herself began after meeting her partner, who introduced her to medicinal mushrooms, which she discovered “took down all these barriers.”

She told her mother about her positive experiences with psilocybin, asking her to join her to help repair past trauma. “I said, ‘I want to heal, so let’s eat these,’” said Robbins. “My sisters were definitely hesitant and not ready to open the floodgates. But my mom was very open to it.”

On the night of winter solstice 2019, mother and daughter prayed prior to their experience, “asking the medicine to show us what we need to do to heal.” At one point during the hours that followed, “we laid down,” said Robbins, “and she held me. It felt like I was back in the womb.”

But on her trip, Robbins also saw “what the trauma was (in my youth), and it was challenging. It was difficult. I think I saw figures that represented my guilt and resentment, and hurt and pain that I had inflicted on others, and that others had inflicted on me. They were all sitting and staring at me, and I remember telling them, ‘I see you. I’m trying to heal. Thanks for presenting yourselves. Goodbye.’”

After a while, she walked to her altar and lit an offering of cedar. The altar contained family photos and some of her own paintings — one of her maternal grandfather gourd dancing and another of her maternal great-grandparents and mother at her mother’s kinaalda, or coming of age ceremony. Seeing her relatives in the images, she said, made her feel “safe and protected and tied to them” and reminded her that healing runs in the family.

“That night,” Robbins said, “changed the trajectory of my life.”

Within a month, she was researching mushroom cultivation, seeking out psychedelic community groups, and reading about María Sabina, a Mazatec medicine woman in Oaxaca whose ancestors used mushrooms to heal people in their community. Sabina was the first contemporary Mexican healer to allow Westerners to participate in the velada, a sacred ritual in which psilocybin mushrooms are ingested to open the gates of the mind.

“I learned to harvest and cultivate mushrooms, and to give them the respect they deserve as living, breathing, conscious beings,” said Robbins.

She said she talks to the medicine when she needs answers in her life and only uses the mushrooms sparingly, “perhaps once or twice a year. I don’t want to be constantly consulting them. I want to meet them halfway and do work on the messages I receive from them, put them into practice.”

As for her arrival at Berkeley, the university “was never on my radar, never felt attainable,” said Robbins. Her partner and his family were influential in her decision to apply, she said, adding that it took a major amount of support from her community of friends and family to embark on this new path.

She’s not exactly sure of her future career, but so far, one idea is to create a hub on her reservation in Arizona that focuses on psychedelic plant research and community healing. Or perhaps she’ll work in tribal government and health policy to advocate for psychedelic research projects on tribal reservations.

But Robbins is clear about her mission: “My vision,” she said, “is access to psychedelics for Indigenous peoples. If these medicines are going to be offered soon in contemporary forms, in psychedelic therapy, they also need to be offered as options on reservations.”