“My background all starts with food,” says MPH student Whitney Francis. “Ever since I was a child, I’ve been obsessed with food. I just love to eat and it was a big part of my culture growing up too. My mom is Japanese and my dad is Antiguan. Food is a big way I connected to my family.”

A passion for food may not initially seem like something that would lead to a dual degree in public health and city planning, but for Francis, her desire to tackle food insecurity through systemic reform means her path makes perfect sense.

But she craved working directly with the communities who were feeling the impact. “I really felt like I was missing that connection,” she said. “So after undergrad I knew I wanted to do some sort of direct service work where I was interacting with folks in the community.”

That direct service ended up being the National Health Corps, an AmeriCorps program, where she was placed at the San Francisco Department of Public Health as coordinator for their food pharmacy program. 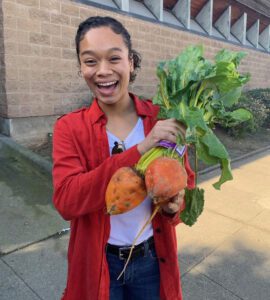 “The target population [for the program] is the Black patient population because of high levels of health disparities especially with hypertension and diabetes,” Francis said.

She says her time at the food pharmacy was formative. “I got to see the public health system in San Francisco from top to bottom,” she said. But when the pandemic hit, she realized that if her program closed, many would go without. It made her wonder how we can get to the root of food insecurity and led her to investigate public health masters programs.

“And as I was working across the different public health programs, I saw these dual degree programs [at UC Berkeley] and city planning really caught my eye,” Francis said. “I thought it would give me really practical, tangible tools to see how cities work.”

Now that she’s midway through the program, she says “I feel like I’m getting close to understanding these different systemic issues and also having the tools to start to tackle those things and take action after I leave Berkeley.”

And her time at UC Berkeley has made her expand her thinking about how best to pursue her drive to make sure all have access to enough nutrition.

Francis has started to work on systemic change here within Berkeley Public Health and is active in anti-racist curriculum organizing.

“It definitely hasn’t been easy,” she says. “At least [my fellow students] felt heard and that the staff and administration and faculty are responsive to what students are asking for and student needs. Everyone is on the same page but it’s a matter of how are we going to get it done. Institutional change is hard and it takes time.”