A stint as a teen participant in the Richmond Youth Air Quality Initiative led to a passion for public health
By Nadia Lathan | September 21, 2022

When Yahna Williamson joined the Richmond Youth Air Quality Initiative during her senior year of high school, she was not expecting the program to change her life for the better. Once unsure about her academic goals, the initiative proved to be an emotionally enriching experience that would ignite a passion for environmental science in Williamson. “It was really empowering,” she said. “Even though we were really young, we had expertise researchers didn’t have.”

Led by the UC Berkeley School of Public Health Center for Environmental Research and Children’s Health (CERCH), the initiative was a research project conducted in 2017 that measured air quality in the Bay Area city of Richmond, home to industrial facilities such as Chevron. Principal investigator and associate adjunct professor in maternal, child, and adolescent health Dr. Kim Harley collaborated with five youth researchers to measure nitrogen dioxide and sulfur dioxide in North Richmond where asthmatic levels are historically high compared to the rest of the state. 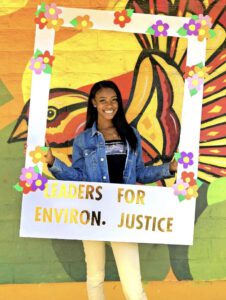 James Nolan ‘16, who earned his MPH in Public Health and Social Behavior from the school two years prior, was responsible for recruiting high school students across the Richmond area as the program director at the time. It was important that prospective students exhibited an ability to follow scientific protocols and a willingness to learn about environmental injustices. In regards to Williamson she “stood out immediately,” said Nolan. “She was personable, professional, outgoing, goal-oriented, and diligent throughout.”

As a Richmond native, this discovery was revolutionary for Williamson. It helped her gain a deeper understanding of the health disparities in her community and the intersections between infrastructure and health. “I feel like [the project] changed my life…it changed the trajectory of what I wanted to study,” she said.

That summer she would go on to work for the Air-Flow Improvements during Meal-Prep (AIM) Study, another CERCH project that examined indoor air pollution from cooking and its impact on asthmatic children. There, Williamson placed air filters inside the homes of Richmond residents and conducted surveys.

Both projects cemented a passion “to chip away” at environmental injustices within marginalized communities. Prior to the Richmond Air Quality Initiative and AIM Study, Williamson was uncertain about her academic path, which finally became clearer after the CERCH programs. Last year, she earned a bachelor’s degree in environmental science with an emphasis in social justice from San Francisco State University.

Now pursuing an MPH in social behavior at Berkeley Public Health, she credits James Nolan for her academic career as he, too, studied social behavior at the school. Similarly, Williamson hopes to work with children and learn professional development during her program.

“When someone is more educated on an issue, they’re more inclined to do something about it,” she said.