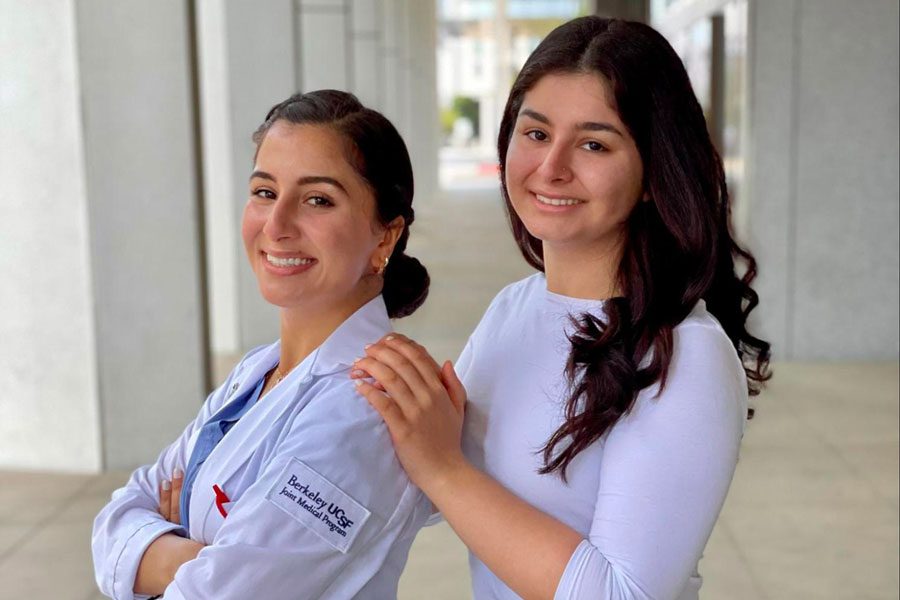 Nazineen on left wearing the JMP white coat and scrubs, Nilufar on right.

During the COVID-19 pandemic, sisters Nazineen Kandahari, a student in the UC Berkeley-UCSF Joint Medical Program (JMP), and Nilufar Kayhani, a UC Berkeley undergraduate in Public Health, have been busy improving the health of Bay Area Afghan refugees.

Beginning in January 2020, Kandahari and Kayhani interviewed numerous Afghan women and partnered with Bay Area refugee resettlement, aid, healthcare, and religious nonprofit organizations to create a community health response that would allow them to address the specific needs of the community. Their initiative, Afghan Clinic, is rooted in the Afghan spiritual tradition of the sofreh, where women come together to pray, eat, and support one another, and blends the sisters’ studies in public health with their cultural heritage.

Nazineen won a 2020-21 SF Bay Area Schweitzer Fellowship and a Human Rights Center Fellowship from the UC Berkeley School of Law and Nilufar was awarded a Center for Race and Gender grant from UC Berkeley to support the Clinic.

Due to the COVID-19 pandemic, Kandahari and Kayhani had to postpone their original plan of in-person sofreh health education gatherings to gather the information they needed to launch the Clinic. They instead conducted a series of one-on-one in-person and online interviews with Afghan refugee women to better understand health and healthcare access issues among this population. Kayhani and Kandahari told study participants that their answers to interview questions would be the basis for a website and a larger health education initiative.

Kandahari and Kayhani’s idea for the Clinic was inspired by the disconnect they saw in their own community between health resources and knowledge, especially for new immigrants to the United States. The sisters grew up immersed in the community, language, and culture of Bay Area Afghans. Kandahari herself is an asylum seeker, her family having moved to the United States from Iran when she was four years old—after fleeing Afghanistan years before.

“The core of why I am pursuing a career in medicine is to serve those most underserved and marginalized by the healthcare institution, which stems from my own upbringing in the Afghan immigrant community, the majority of whom were forced to leave their country due to war, Taliban, and turmoil.” said Kandahari. “I think my being Afghan allows me to engage with this population in a unique way that perhaps someone who is not Afghan could not have. For one, I can speak their language comfortably. Second, I understand some of the cultural underpinnings.”

Partnerships with Bay Area refugee organizations helped them get to know diverse populations of Afghans, who ranged in terms of age, how long ago they resettled, how strongly they identify with their religion, and from which region of Afghanistan they originated.

“We covered the different cultural microcosms and their different levels of access to education and resources,” said Kayhani.

The few studies that attempt to characterize the health of Afghan immigrants in the United States—including the guidance from the CDC, studies specifically targeting Afghan women’s understanding of their health and studies on the health profiles of Afghan via visa holders from 2009-2017—find that Afghans suffer from lower knowledge of their health, more psychological disorders, and high rates of discrimination, all of which exacerbate the stressors inherent to immigration.

According to Kandahari, the disparities are even more pronounced among Afghan women still living in Afghanistan, who have the most barriers in access to health education because of asymmetrical access to the workforce and education, and the inability to leave home without a male relative.

“Given these sociocultural constraints, sexual and reprodictive health are not talked about in schools or otherwise, and many health workers refuse to provide contraceptives to unmarried women because sex outside of marriage is frowned upon,” said Kandahari. “As a result, there are pervasive misunderstandings about sexual and reproductive health among Afghan women. We aim to address that. And in our interviews we’ve found that Afghan women are ready and wanting to change that narrative as well.”

An educational hub in English and Dari

Since the Clinic opened in February 2021, it’s had a remarkable impact, especially on refugees who settled in the Bay Area during the pandemic and didn’t have the chance to set up a social network or access in-person services they needed to transition their lives to a new country.

“Having an hour to talk to someone from their community, who spoke their language, who could understand their hardships, was very cathartic,” said Nazineen.

The Afghan Clinic offers immigrants a health education hub in English and Dari, the most widely spoken language in Afghanistan. This includes webinars on Zoom, videos on YouTube, virtual community gatherings in the style of Afghan sofrehs, and consultations with Afghan American medical students who can provide online one-on-one support and education. Thus far their programming has reached more than 1,800 individuals, including six one-on-one clients.

The Clinic has also helped clients understand COVID-19 vaccines. In a live webinar offered in February in the Dari language, Kandahari explained vaccine basics, from locations where vaccines are available to the vaccine’s effects on the body. Nearly everyone who attended the webinar said that they were interested in getting vaccinated after learning more information and felt confident and comfortable in that decision.

Kandahari feels that through this project, her community’s compassion—and their gratitude for the services she provides—is palpable.

“One woman said, ‘I don’t have any education to be able to help you in school, but I do know how to make good Afghan food that I can send you so you can focus on studying.’ Despite being stripped of everything and having so little, they are so giving, and they offer me whatever they can. Their hospitality knows no bounds,” said Kandahari. “That generosity and commitment to one’s community, that is what I love about being Afghan.”

“This project has been life-changing for me,” she continued. “Some of the participants said things such as ‘Wow I feel like a weight was lifted off my shoulders.’ It makes me so happy to know that I could have served that role in their lives. I was happy to play a role in resolving some of those concerns and fears.”