How a viral toxin may exacerbate severe COVID-19 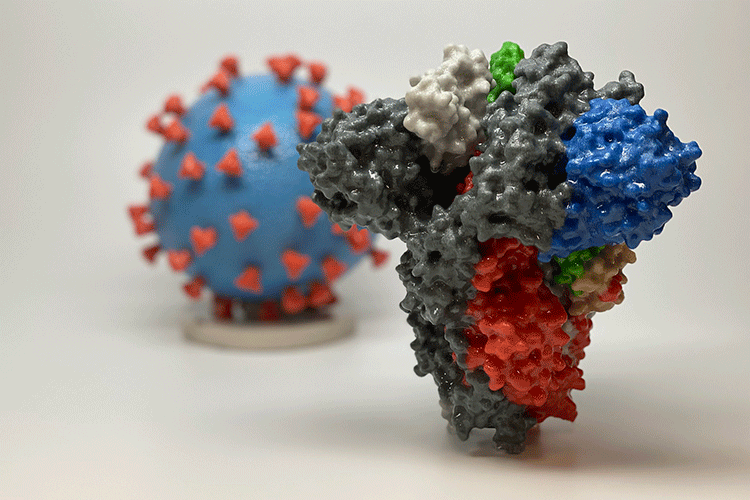 In a new study, University of California, Berkeley, researchers find that portions of the SARS-CoV-2 “spike” protein, shown in the foreground, can damage the cell barriers that line the inside of blood vessels, contributing to some of COVID-19’s most dangerous symptoms, including acute respiratory distress syndrome (ARDS). (National Institutes of Health photo via Flickr)

A study published today in the journal Nature Communications reveals how a viral toxin produced by the SARS-CoV-2 virus may contribute to severe COVID-19 infections.

The study shows how a portion of the SARS-CoV-2 “spike” protein can damage cell barriers that line the inside of blood vessels within organs of the body, such as the lungs, contributing to what is known as vascular leak. Blocking the activity of this protein may help prevent some of COVID-19’s deadliest symptoms, including pulmonary edema, which contributes to acute respiratory distress syndrome (ARDS).

“In theory, by specifically targeting this pathway, we could block pathogenesis that leads to vascular disorder and acute respiratory distress syndrome without needing to target the virus itself,” said study lead author Scott Biering, a postdoctoral scholar at the University of California, Berkeley. “In light of all the different variants that are emerging and the difficulty in preventing infection from each one individually, it might be beneficial to focus on these triggers of pathogenesis in addition to blocking infection altogether.”

While many vaccine skeptics have stoked fears about potential dangers of the SARS-CoV-2 spike protein — which is the target of COVID-19 mRNA vaccines — the researchers say that their work provides no evidence that the spike protein can cause symptoms in the absence of viral infection. Instead, their study suggests that the spike protein may work in tandem with the virus and the body’s own immune response to trigger life-threatening symptoms.

In addition, the amount of spike protein circulating in the body after vaccination is far less concentrated than the amounts that have been observed in patients with severe COVID-19 and that were used in the study.

“The amount of spike protein that you would have in a vaccine would never be able to cause leak,” said study senior author Eva Harris, a professor of infectious diseases and vaccinology at UC Berkeley. “In addition, there’s no evidence that [the spike protein] is pathogenic by itself. The idea is that it’s able to aid and abet an ongoing infection.”

By examining the impact of the SARS-CoV-2 spike protein on human lung and vascular cells, and on the lungs of mice, the research team was able to uncover the molecular pathways that allow the spike protein to disrupt critical internal barriers in the body. In addition to opening new avenues for the treatment of severe COVID-19, understanding how the spike protein contributes to vascular leak could shed light on the pathology behind other emerging infectious diseases.

“We think that a lot of viruses that cause severe disease may encode a viral toxin,” Biering said. “These proteins, independent of viral infection, interact with barrier cells and cause these barriers to malfunction. This allows the virus to disseminate, and that amplification of virus and vascular leak is what triggers severe disease. I’m hoping that we can use the principles that we’ve learned from the SARS-CoV-2 virus to find ways to block this pathogenesis so that we are more prepared when the next pandemic happens.”

Vascular leak occurs when the cells that line blood vessels and capillaries are disrupted, allowing plasma and other fluids to leak out of the bloodstream. In addition to causing the lung and heart damage observed in severe COVID-19, vascular leak can also lead to hypovolemic shock, the primary cause of death from dengue.

Before the COVID-19 pandemic, Biering and other members of the Harris Research Program were studying the role of dengue virus protein NS1 in triggering vascular leak and contributing to hypovolemic shock. When the pandemic hit, the team wondered if a similar viral toxin in SARS-CoV-2 could also be contributing to the acute respiratory distress syndrome that was killing COVID-19 patients. 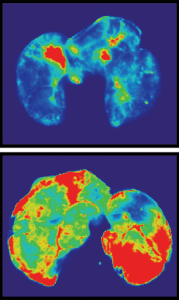 Vascular leak in the lungs of mice, imaged with tracer dye. The top image shows a healthy mouse lung and the bottom image is a mouse lung that has been exposed to spike protein. Colors on the red and orange end of the spectrum correspond to greater vascular leak. (Image courtesy Felix Pahmeier)

“People are aware of the role of bacterial toxins, but the concept of a viral toxin is still a really new idea,” Harris said. “We had identified this protein secreted from dengue virus-infected cells that, even in the absence of the virus, is able to cause endothelial permeability and disrupt internal barriers. So, we wondered if a SARS-CoV-2 protein, like spike, might be able to do similar things.”

Spike proteins coat the outer surface of SARS-CoV-2, giving the virus its knobby appearance. They play a critical role in helping the virus infect its hosts: The spike protein binds to a receptor called ACE2 on human and other mammalian cells, which — like a key turning a lock — allows the virus to enter the cell and hijack cellular function. The SARS-CoV-2 virus sheds a large portion of the spike protein containing the receptor-binding domain (RBD) when it infects a cell.

“What’s really interesting is that circulating spike protein correlates with severe COVID-19 cases in the clinic,” Biering said. “We wanted to ask if this protein was also contributing to any vascular leak we saw in the context of SARS-CoV-2.”

Currently, scientists attribute the heart and lung damage associated with severe COVID-19 to an overactive immune response called a cytokine storm. To test the theory that the spike protein might also play a role, Biering and other team members used thin layers of human endothelial and epithelial cells to mimic the linings of blood vessels in the body. They found that exposing these cellular layers to the spike protein increased their permeability, a hallmark of vascular leak.

Using CRISPR-Cas9 gene editing technology, the team showed that this increased permeability occurred even in cells that did not express the ACE2 receptor, indicating that it could occur independently of viral infection. In addition, they found that mice that were exposed to the spike protein also exhibited vascular leak, even though mice do not express the human ACE2 receptor and cannot be infected with SARS-CoV-2.

Finally, with the help of RNA sequencing, the researchers found that the spike protein triggers vascular leak through a molecular signaling pathway that involves glycans, integrins and transforming growth factor beta (TGF-beta). By blocking the activity of integrins, the team was able to reverse the vascular leak in mice.

“We identified a new pathogenic mechanism of SARS-CoV-2 in which the spike protein can break down the barriers lining our vasculature. The resulting increase in permeability can lead to vascular leak, as is commonly observed in severe COVID-19 cases, and we could recapitulate those disease manifestations in our mouse models,” said study co-author Felix Pahmeier, a graduate student in the Harris lab at UC Berkeley’s School of Public Health. “It was interesting to see the similarities and differences between spike and dengue virus protein NS1. Both are able to disrupt endothelial barriers, but the timelines and host pathways involved seem to differ between the two.”

While blocking the activity of integrins may be a promising target for treating severe COVID-19, Harris said more work needs to be done to understand the exact role of this pathway in disease progression. While increased vascular permeability can accelerate infection and lead to internal bleeding, it can also help the body fight off the virus by giving immune machinery better access to infected cells.

“SARS-CoV-2 evolved to have a spike surface protein with increased capacity of interacting with host cell membrane factors, such as integrins, by acquiring an RGD motif. This motif is a common integrin-binding factor exploited by many pathogens, including bacteria and other viruses, to infect host cells,” said Francielle Tramontini Gomes de Sousa, former assistant project scientist in Harris’s lab and co-first author of the study. “Our study shows how spike RGD interacts with integrins, resulting in TGF-beta release and activation of TGF-beta signaling. Using in vitro and in vivo models of epithelial, endothelial and vascular permeability, we were able to improve understanding of the cellular mechanisms of increased levels of TGF-beta in COVID-19 patients and how spike-host cell interactions could contribute to disease.”

The team is continuing to study the molecular mechanisms that lead to vascular leak and is also investigating possible viral toxins in other viruses that cause severe disease in humans.

“COVID-19 is not gone. We have better vaccines now, but we don’t know how the virus is going to mutate in the future,” Biering said. “Studying this process may be able to help us develop a new arsenal of drugs so that if someone is experiencing vascular leak, we can just target that. Maybe it doesn’t stop the virus from replicating, but it could stop that person from dying.”