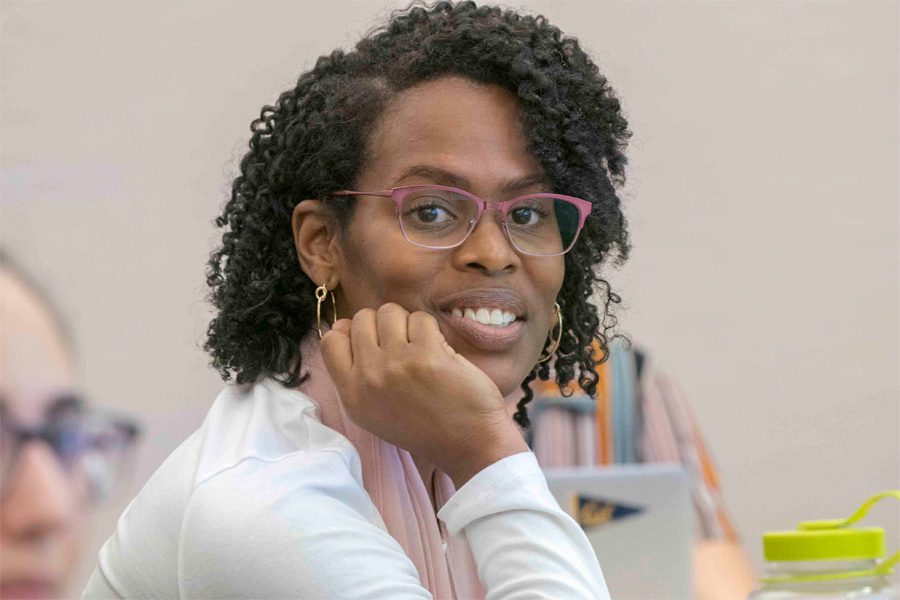 Distinguished social epidemiologist, researcher, and Associate Professor Mahasin Mujahid, MS, PhD, FAHA is the new head of the Division of Epidemiology at the UC Berkeley School of Public Health. A long-time faculty member and the Lillian E.I. and Dudley J. Aldous Chair in the School of Public Health, Professor Mujahid taught for 13 years in the Division before becoming the first Black woman to helm it.

Mujahid is no stranger to leadership positions and has previously held several prominent positions within Berkeley Public Health and the broader campus, including serving as director of the Epidemiology and Biostatistics MPH program, as the co-director of Master of City Planning/Master of Public Health (MCP/MPH) program, and as the Chancellor’s Professor of Public Health. She was the founding faculty member of BPH student group Black Advocates for Equity in Health.

She has also worked nationally as a scientific expert in social health inequities for the National Institutes of Health, American Heart Association, National Academies of Sciences, Engineering, and Medicine, and Centers for Disease Control.

A Michigan native and HBCU (historically black colleges and universities) alumna, Mujahid is ardent about students of color seeing themselves as epidemiologists and biostatisticians. While an undergraduate at Xavier University, seeing Black engineers, chemists, and biologists instilled confidence in her to pursue a career in academia. “It allowed me to free myself up from feeling that I had to be in a box,” Mujahid said.

It was meeting faculty like Professor Ana V. Diez Roux, dean of the Dornsife School of Public Health at Drexel University, that crystallized a future in epidemiology for Mujahid. Roux was an early reflection of the professor she sought to be, carrying a personal goal to recruit and mentor underrepresented PhD students.

“She showed me a model of what it means to be committed to diversifying graduate programs,” said Mujahid. “So what I wanted to do as a professor was be really intentional about mentoring people up to get their PhDs.”

Larissa Benjamin, who earned her MPH in Health and Social Behavior from Berkeley Public Health in 2019, can attest to this. The relationship Benjamin forged with Professor Mujahid while working as a project policy analyst and manager of Mujahid’s research group PLACE compelled her to pursue a doctorate in public health to research the structural drivers of cardiovascular health disparities in the rural Southeastern states where her father grew up. Benjamin will do this work as part of the Risk Underlying Rural Areas Longitudinal Study, for which Professor Mujahid is the principal investigator of the Social Determinants Scientific Core. In this role, Mujahid leads a team of investigators in examining the impact of multi-level psychosocial factors on cardiovascular risk and resilience in rural communities.

Dedicated to using multi-racial, intergenerational, and geospatial data to examine racial disparities in cardiovascular and maternal health, PLACE is comprised of doctoral students and affiliated researchers who collaborate to produce papers that add nuance to apply structural and historical lenses to the traditional public health view that health is primarily determined by biology and lifestyle choices. While Benjamin was not part of the original study, she came to see how this research group could help her develop her research questions and methods as a DrPH student.

“[Mahasin] helped me think through the pros and cons, and agreed to help mentor me through the program and find funding opportunities,” said Benjamin. “As someone who is one generation removed from poverty, this is a huge honor and I feel so fortunate to be able to work with Mahasin.”

Mujahid has always been intent on approaching her research from an interdisciplinary lens to explain phenomena in data. By drawing on social theories as much as statistics, Mujahid found a place at Berkeley Public Health to teach students to think deeply about solutions after crunching numbers.

“I was willing to step into the role because I think this is an amazing school,” said Mujahid. Although initially nervous about the position, she knew it would be important to head the division as a researcher focused on better understanding structural inequalities within health. “We have amazing students and amazing staff.”

According to Dean Michael C. Lu, Professor Mujahid was unanimously chosen by the epidemiology faculty and represents the school’s core values of advancing health equity and social justice.

“I expect Dr. Mujahid to take the division from best to better, given her extraordinary track record of academic leadership, scholarship, teaching, and mentoring,” said Lu. “She truly exemplifies the kind of public health innovator, changemaker, and arc-bender that all of us aspire to become.”

In regard to her passion for math and science, Mujahid said it all started when her father, who had a personal dream of becoming an astronomer, encouraged her to think quantitatively. “Math was how we talked about everything…[it] became our love story.”