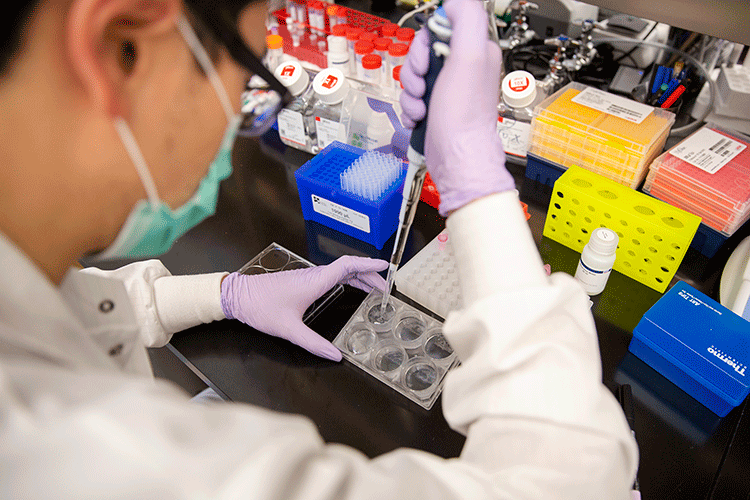 UC Berkeley postdoctoral scholar Chi Zhu is part of a team of researchers who are developing a new COVID-19 therapeutic that can be administered as a nasal spray. The experimental treatment is effective against all SARS-CoV-2 “variants of concern” and could be readily modified to target other RNA viruses. (UC Berkeley photo by Brittany Hosea-Small)

Scientists at the University of California, Berkeley, have created a new COVID-19 therapeutic that could one day make treating SARS-CoV-2 infections as easy as using a nasal spray for allergies.

The therapeutic uses short snippets of synthetic DNA to gum up the genetic machinery that allows SARS-CoV-2 to replicate within the body.

In a new study published online in the journal Nature Communications, the team shows that these short snippets, called antisense oligonucleotides (ASOs), are highly effective at preventing the virus from replicating in human cells. When administered in the nose, these ASOs are also effective at preventing and treating COVID-19 infection in mice and hamsters. 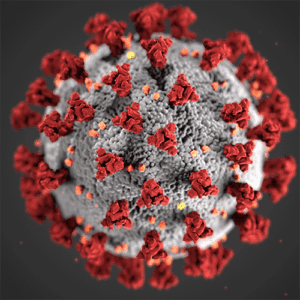 The therapeutic works by interfering with a key region of the SARS-CoV-2 genome.

“Vaccines are making a huge difference, but vaccines are not universal, and there is still a tremendous need for other approaches,” said Anders Näär, a professor of metabolic biology in the Department of Nutritional Sciences and Toxicology (NST) at UC Berkeley and senior author of the paper. “A nasal spray that is cheaply available everywhere and that could prevent someone from getting infected or prevent serious disease could be immensely helpful.”

Because the ASO treatment targets a portion of the viral genome that is highly conserved among different variants, it is effective against all SARS-CoV-2 “variants of concern” in human cells and in animal models. It is also chemically stable and relatively inexpensive to produce at large scale, making it ideal for treating COVID-19 infections in areas of the world that do not have access to electricity or refrigeration.

If the treatment proves to be safe and effective in humans, the ASO technology could be readily modified to target other RNA viruses. The research team is already searching for a way to use this to disrupt influenza viruses, which also have pandemic potential.

“If we can design ASOs that target entire viral families, then when a new pandemic emerges, as long as we know which family the virus belongs to, we could use the nasally delivered ASOs to suppress the pandemic in its early stages,” said study first author Chi Zhu, a postdoctoral scholar in NST at UC Berkeley. “That’s the beauty of this new therapeutic.” 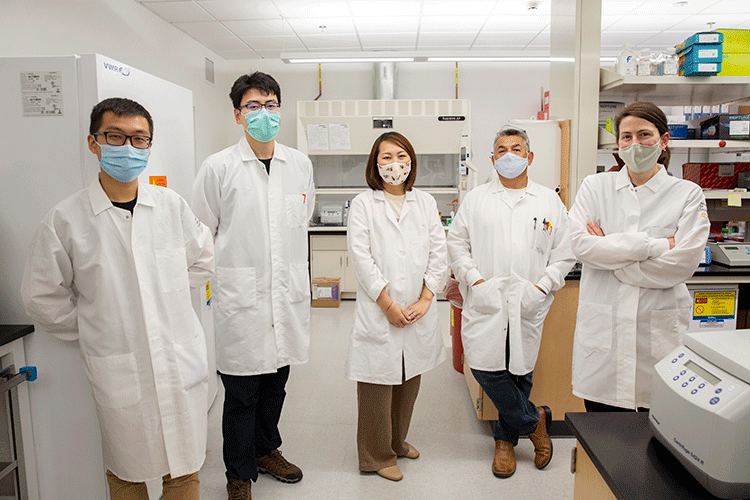 Like DNA, RNA carries genetic information coded in a sequence of bases — but unlike DNA, RNA usually comes in a single strand, without a second, complementary strand to form a double helix. However, RNA still readily binds to complementary base pair sequences. ASOs are short strands of lab-made, DNA-like molecules that, like molecular Velcro, are programmed to stick to specific sequences of RNA in viruses and cells.

For more than a decade, Näär and his team have been studying how these molecules might be used to modify the activity of messenger RNA and microRNA in the human body, potentially reversing conditions like obesity, Type 2 diabetes, fatty liver diseases and Duchenne muscular dystrophy. When the COVID-19 pandemic hit, his team quickly mobilized to study whether ASOs could also be used to interfere with SARS-CoV-2.

“The SARS-CoV-2 genome is single-stranded RNA, similar to messenger RNA or microRNA,” Näär said. “We thought perhaps we could use these ASOs to stick onto the viral RNA and prevent it from working.” 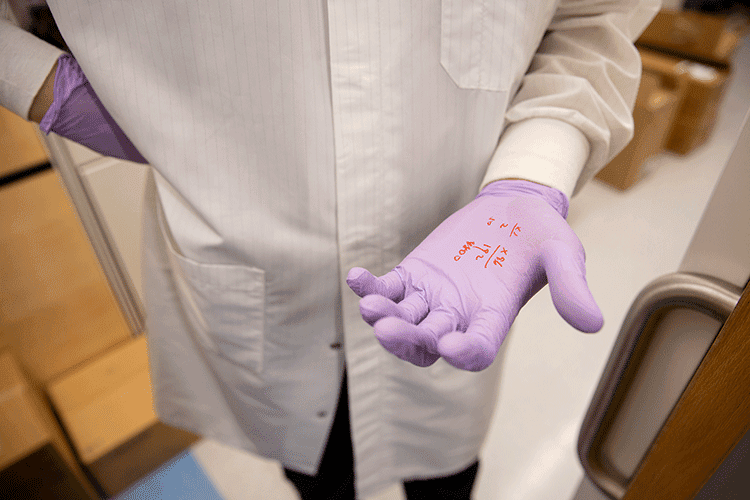 Chi Zhu checks calculations on his gloves before preparing a new batch of antisense oligonucleotides (ASOs) in the lab. (UC Berkeley photo by Brittany Hosea-Small)

In collaboration with associate professor Sarah Stanley’s lab at UC Berkeley’s School of Public Health and Department of Molecular and Cell Biology, and scientists at the Innovative Genomics Institute, the team began pitting the SARS-CoV-2 virus against hundreds of different ASOs. Each of these ASOs was designed to disrupt a different region of the viral RNA, including the region that codes for the infamous “spike” protein that helps the SARS-CoV-2 virus hijack host cells.

Out of all these targets, they identified one that was far and above the most effective at disrupting the virus. This target was a non-coding sequence of viral RNA that forms a hairpin loop structure and that appears to play a key role in helping SARS-CoV-2 replicate.

“We showed that if you bind an ASO to this hairpin, it dissolves the hairpin, and the RNA forms a straight line instead of a bubble structure,” Näär said. “We think that this prevents the virus from effectively translating and replicating, and we found that it was incredibly effective at preventing viral replication in human cells.”

When they administered ASOs into the noses of infected hamsters and mice, the team found that they were also highly effective at both preventing and treating COVID-19 infections. Importantly, these experiments also showed that the ASOs did not appear to stimulate any significant immune response, indicating that ASOs are not likely to produce toxic side effects in humans.

Because the hairpin loop structure is found in all known variants of SARS-CoV-2, ASOs should be effective against all of them. To prove that this is the case, the team repeated their experiments against all of the major variants of concern, including Delta and the highly-infectious Omicron. 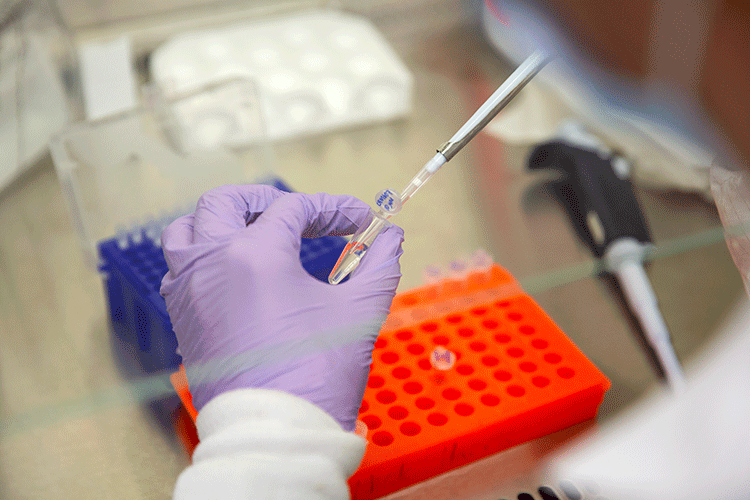 The team tested hundreds of different ASOs, each designed to interfere with a different region of the SARS-CoV-2 genome, before identifying one that was highly effective at blocking the activity of the virus. (UC Berkeley photo by Brittany Hosea-Small)

“[SARS-CoV-2] enters the body and hijacks our own machinery to become a copy machine to produce tons of virus copies for more infection and spread,” said study author and UC Berkeley NST graduate student Justin Lee in a winning UC Grad Slam talk. “We were able to find the key code in the viral RNA that allows the copy machine to run, and all the variants, including Delta and Omicron, share the same key code.”

According to Näär, the team has already identified an additional ASO target that is found in the genetic code of all SARS-family viruses, including the SARS-CoV-1 virus that caused the 2002 SARS outbreak. A “cocktail’ of these two ASOs could be even more effective at suppressing the virus — and would be nearly impossible for a new variant to evade.

The team has additional experiments to conduct before the ASO treatment will be cleared for clinical trials in humans. However, Näär is optimistic that the therapeutic could one day be used as part of a spectrum of treatments for COVID-19 and other viral illnesses.

“It’s very clear that this virus is not going away,” Näär said. “We need a lot of different avenues to tackle it, and therapeutics like ours that are agnostic to the variants could play a major role.”

This research was supported in part by Fast Grants and by the Innovative Genomics Institute.

In his winning talk at the 2022 UC Grad Slam, Justin Lee describes how the new treatment works by “jamming the COVID-19 copy machine.” (University of California video)