Air pollution in California’s San Joaquin Valley has decreased significantly over the last decade, with concentrations of polycyclic aromatic hydrocarbons (PAH) decreasing by as much as 60%. 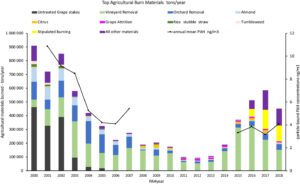 A chart detailing the change over time in types of agricultural materials burned in the San Joaquin Valley.

The decrease is welcome news. Elizabeth Noth, a professional researcher in the division of Environmental Health Sciences at the School of Public Health and lead author of a new study on air pollution in the San Joaquin Valley in Atmospheric Environment, says, “This region has historically high air pollution concentrations compared to the rest of the state, so this decrease is a very welcome finding.”

Previous studies from the same group of researchers found that PAH exposure was related to poor health in pregnant women and children, including increased severity of asthma cases, decreased FEV1 (or the amount of air that can be forced from one’s lungs in one second), impaired systemic immunity, and higher risk of preterm birth.

The new study showed that winter-time levels of PAH in the valley decreased by 82% and overall PAH levels in the city of Fresno decreased by 60% between 2000 and 2019. The most significant decline in PAH concentrations in the area occurred between 2000 and 2004, due to a decline in agricultural and biomass waste burned in Fresno and Madera counties.

“The San Joaquin Valley achieved this through policies that changed what types of materials were allowed to be burned and when those materials could be burned,” Noth said. “Improvements to the technology used to forecast when agricultural waste burning would be particularly detrimental to air quality, such as ‘no burn’ days, have also played a key role.”

Researchers found several other reasons for PAH concentration declines, including changes in on-road vehicle emissions and rates of residential wood burning, both of which declined from 2005 on.

“The hope is that decreased exposures to polycyclic aromatic hydrocarbons will translate into better health for everyone in the region,” Noth said. “The implication beyond California is that agricultural waste burning is potentially a huge source of air pollution, especially PAHs, and with adequate prediction capabilities, the impact of burning can be decreased.”