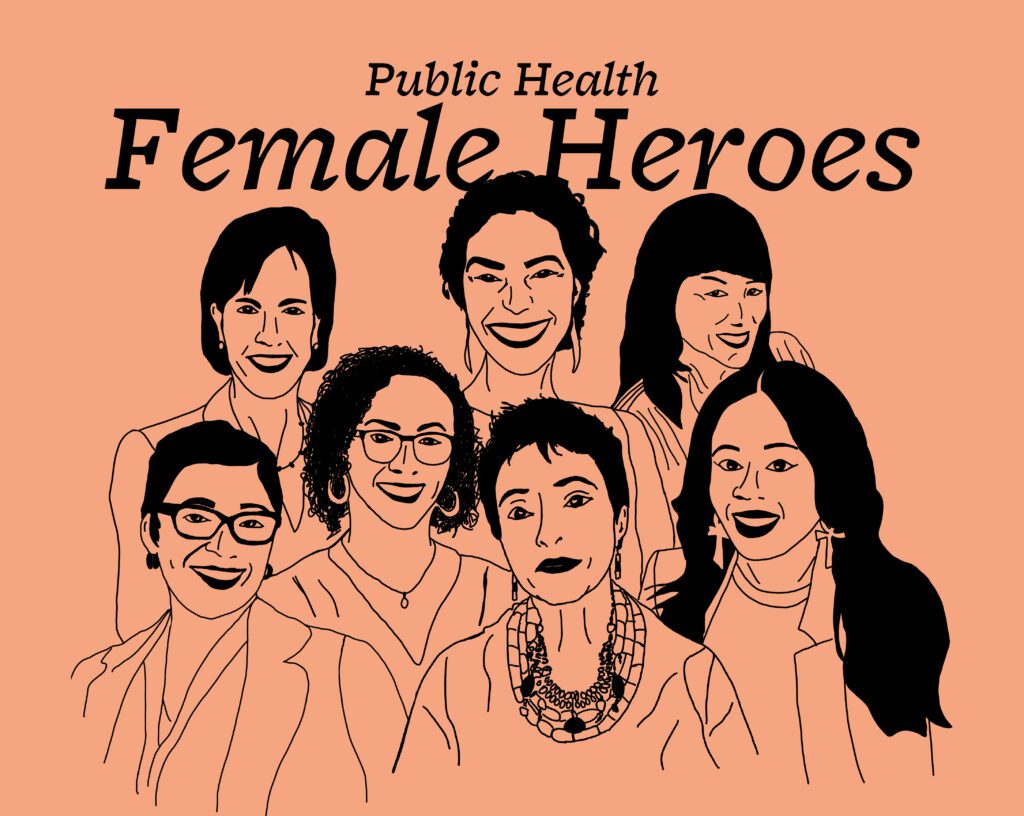 In honor of Women’s History Month, we asked our Berkeley Public Health community members—faculty, students, and staff—who their female public health heroes are. The answers ranged from students and faculty here at our own school to women who were trailblazers in the public forum. Here’s a cross section of the women we admire most:

Undergraduate public health student Nilufar Kayhani, co-founder of the East Bay’s Afghan Clinic, nominated a pantheon of “amazing Berkeley Public Health women who are so committed to mentorship. I’m constantly inspired by them. They are the reason I am who I am today.”

Her list includes Professor Amani Allen, renowned for her research on the measurement and study of racism as a social determinant of health and her anti-racism work within the School; Maternal, Child, and Adolescent Health Professor and physician Ndola Prata; Professor of Epidemiology and Director of the Undergraduate Public Health Major Program Lisa Barcellos; Associate Professor of Epidemiology Mahasin Mujahid, whose research recently pointed out the connection between historic redlining and hypertension risk; Adjunct Professor and Director of Health Research for Action Susan Lee Ivey; Assistant Adjunct Professor of Community Health sciences Hannah Thompson; and her own sister, co-founder of Afghan Clinic, recent MPH graduate, and MD candidate in the Joint Medical Program Nazineen Kandahari.

Berkeley Public Health’s Assistant Dean for Students Quin Hussey, MPH, says her female public health hero is Zea Malawa, MD, MPH ‘17. “She is a fierce anti-racism advocate and does incredibly innovative work in the space of Maternal Child and Adolescent Health by running a program that provides an income supplement to pregnant Black and Pacific Islander people in SF.” Malawa serves as program manager for the San Francisco Department of Public Health’s Collective Impact to Prevent Preterm Birth and the physician director of Expecting Justice, a health non-profit dedicated to improving maternal health outcomes for Black and Pacific Islander women in San Francisco.

“As Secretary of Health and Human Services from 2009 until 2014, Sebelius was pivotal in overseeing implementation of the Affordable Care Act,” Kim says. “A politician and a businesswoman too, she served as the 44th governor of Kansas from 2003 to 2009. She held many other ‘first woman’ roles, breaking the ceiling as a role model for women everywhere. I also like her because she drove huge inroads in ensuring access to health care coverage but also preventative health services, among other needed health provisions, for tens of thousands of Americans. She was/is compassionate, realistic and effective in her leadership, moving mountains!”

Staff member Julie C. Moss, an instructional designer, taps Jocelyn Elders. “She was briefly the surgeon general during my college years and fearlessly expressed progressive ideas that got her unjustly fired. She was a hero to our age group,” Moss said.

Rachel David, a public health undergraduate student graduating this year, says, “My cousin Syrita Steib is a public health hero. After experiencing struggles as a formerly incarcerated woman, she founded the non-profit organization Operation Restoration in 2016 which is operated by and for formerly incarcerated women to provide financial, legal, and social support by way of housing, bail bonds, financial stipends, educational opportunities, and more. Her non-profit also works on legal advocacy to change laws that create systemic barriers for formerly incarcerated women re-entering society. Their team has a human-centered approach focusing on addressing social determinants of health by providing resources that allow women, many of which are low-income women of color, to change their lives for the better.”

Pilar Marin, a second-year MPH student in Public Health Nutrition, says, “Marquisele Mercedes, Monica Kriete, Patrilie Hernandez, and Imani Barbarin have all opened my eyes to manners in which public health perpetuates oppression and continues to exclude/expolite marginalized individuals. They all speak closely to the manners in which healthism, classism, colonialism, fatphobia, desirability politics, ableism, and eugenics thrive within this field and as a result, routinely continue to perpetuate the issues we continually try to “solve.” They definitely took my blinders off and have revolutionized and radicalized what I envision public health can look like and should look like.”

Karoline Guthrie, another Public Health Nutrition student pursuing her MPH, says, “My female public health hero is Sabrina Strings, a professor at UC Irvine who has dedicated her work toward unveiling fat phobia and the racial origins behind fat phobia, and how that continues to oppress people of color and Black individuals especially. She has emphasized weight discrimination and stigma as a public health issue, and continues to fight for the education of this issue and its racial origins.”

For more on the history of women at Berkeley Public Health, visit our 150 Years of Women site.